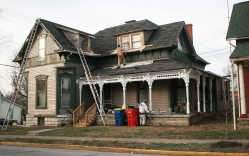 It may be winter, but a paint and repair crew is hard at work, rehabbing the house at 111 W. Walnut St. in Greencastle. The property is now owned by local attorney James Holder, who will be moving into the residence and operating his law office there as a home occupation after approval Tuesday night by the Zoning Board. Holder said he wants to restore the home's exterior, which will include new windows, renovation of the porch and painting all around.

With an attorney's office right across the street and a florist on the corner, it would seem the property at 111 W. Walnut St. might be perfect for a law office/residence.

After all, the building in question once housed an antique shop itself.

Yet just as time can heal all wounds, it can undo things, too. And one of those coming undone can be zoning variances.

Since the property, once owned and operated by Dan Rattray as an antique shop and apartments, has not been used in that fashion for several years, its zoning designation had reverted to the Traditional Neighborhood (TN) zoning of the area.

Because of that, Putnam County attorney James H. Holder Jr. had to hold court before the Greencastle Board of Zoning Appeals (BZA) Tuesday night, requesting a special exception use variance for a legal office in a residence.

Legal service is listed as an allowable Type II home occupation in the TN zoning district.

Holder, who has been practicing law in Putnam County for more than 18 years from a residence in Groveland, recently purchased the 2,000-square-foot West Walnut Street building as a residence with a secondary use as an office.

He has been making improvements to it, including painting the exterior, redoing the decorative trim, rehabbing the porch and installing new windows.

"My intention is for it to look professional as well as residential," he told the BZA and a couple of neighbors in attendance at the 25-minute meeting at City Hall.

Holder plans to use one-third of one floor of the structure for his law practice, estimating that it will encompass 17 percent of the building (home occupation regulations limit such areas to 25 percent). The only equipment planned will be a desk, computer and copier.

Typically, Holder said, he sees four clients per day each Tuesday, Wednesday and Thursday. As a home occupation, he is limited to one sign of no more than two square feet.

Holder will be the only attorney working from the site, and he is limited to one other employee.

There is no off-street parking available onsite, however, the on-street parking along the south side of Walnut and both sides of the adjoining Market Street is typically not heavily utilized.

Although the building currently is divided into three apartment units, by using it as a primary residence and office, Holder would be limited to one additional living unit.

He said Tuesday night he was unsure if he would rent out a space, although he did mention possibly having a property caretaker live there.

In other action Tuesday night, Mayor Sue Murray swore in City Planner Shannon Norman for another year as Planning Department head prior to the BZA meeting. Norman was unable to attend the Dec. 27 city swearing-in ceremonies.

The next regular session of the BZA is set for 6 p.m. Tuesday, Feb. 7 at City Hall.