Bedwell honored as Dispatcher of the Year 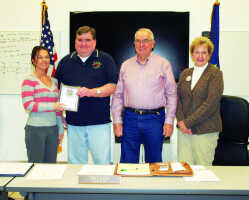 Having helped save at least two lives in the last year, Jason Bedwell (second from left) was named the 2011 Dispatcher of the Year at Tuesday's Putnam County Commissioners' meeting. Commissioners Kristina Warren (left), Gene Beck (third from left) and Nancy Fogle present Bedwell with his award.

The chance to actually save a life is rare for most people. But for a 911 dispatcher, the opportunity could always arise the very next time the phone rings.

At least twice in 2011, Putnam County dispatcher Jason Bedwell had the opportunity.

"Twice in the last year I've heard Jason calmly give CPR (instructions) over the telephone," 911 Director Dave Costin said. "There are probably other times that I don't know of, but that's two people alive today because of Jason. To me, that's a hero in action."

The lives he's helped save and his everyday hard work and devotion made Bedwell an easy choice for 2011 Dispatcher of the Year.

"I wish I could clone Jason's attendance," Costin said. "He's hardly ever ill and rarely takes time off. Sometimes we have to schedule him time off."

Costin said Bedwell is willing to work overtime, to take on extra shifts when needed and is always to work on time.

"He's one of those employees I hardly ever have to think about because I know he's doing his job," Costin said.

In the case of the two life-saving opportunities of the last year, Bedwell barely raised his voice in helping the citizens perform CPR on their loved ones.

"It was just like a machine the way he gave it out," Costin said. "Both times the person survived. He kept them going until the ambulance got there."

Besides all the necessary traits of a good dispatcher, Bedwell's boss also praised his sense of humor and wit, calling him "a pleasure to work with."

Bedwell has been a full-time dispatcher for nearly four years following more than two years working part time. Prior to this, he worked for the Putnam County Sheriff's Department as a jailer and on security detail at the courthouse.

"He has been a devoted county employee," Costin said.