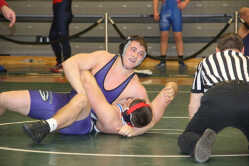 On Thursday, the Greencastle wrestling team hosted Danville on a night when it honored its three seniors. The Warriors came on strong down the stretch and delivered the Tiger Cubs a 43-30 loss.

After the meet, GHS head coach Matt McComish was pleased with his team's effort against a very tough opponent.

"We did wrestle well," McComish said. "Both of our seniors came away with wins. We had one senior who was injured, but we wrestled well against a really good team, so I'm pretty happy with our performance. They have a solid lineup from top to bottom. Their program is good and they got the numbers." 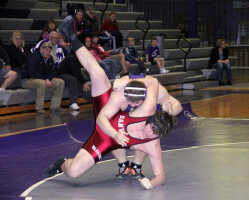 Danville was able to get on the scoreboard first as Aaron Langdon struggled in his opening match at 160 against Danville's Asa Lynch. Langdon lost his match to Lynch by fall in the first period.

Greencastle got on the board in the next match as Carter Lewis battled the Warriors' Gabe Diedrich, winning at 170 by a margin of 6-3. Anthony Leonard followed that up with win at 182 over Danville's Matt Martin 7-2, tying the match at 6-all.

Following a forfeit loss, Greencastle tied the match up at 12-all when Ben Hesler made quick work of Danville's Trent Kunkle. Hesler recorded a first period pin with 1:16 on the clock. The Tiger Cubs took the lead in the next match as Will Mobley gained the upper hand early to build a lead, but then closed the match down with a pin with one second left in the opening period over the Warriors' Mike Williams.

Greencastle carried that momentum into its next match at 106 when Cameron Hinton was able to record a first period pin over Jacob Gackenheimer to grow the GHS lead to 30-18.

However, the Warriors were able to run the table, winning the final six matches en route to a 43-30.

McComish pointed out that even in the matches his wrestlers lost, they still continued battle.

"Even in matches that we came up short, I think our guys put in a good effort," McComish said. "Riley Boswell ended up getting beat, but I thought he had a solid effort against a really good wrestler. We wrestled hard from top to bottom and I can't fault our effort."

He also spoke about something his team needs to focus on to get the upper hand in close matches.

"Sometimes we just quit moving and we need to make some of that movement instinct instead of stopping and thinking about it. It's got to be reaction and through the next week, as they watch the film, they'll see it too. It's just drilling that constant motion over and over again," McComish.

In addition to Hesler and Mobley, senior Duncan Linden was also honored on the night.