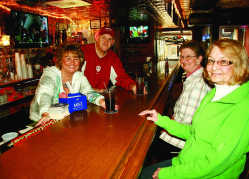 New Moore's Bar owners Jackie and Jay Hopkins go behind the bar to serve soft drinks to longtime owners Jenny Butts (right) and Carolyn Hammond, daughters of the late LeRoy and Inez Moore who bought the Greencastle establishment in 1950.

Lyrically, the bar in the long-running television show "Cheers" stands as the iconic place "where everybody knows your name."

Instead of that Boston TV tavern, they might as well have been singing about Moore's Bar, a Greencastle fixture for more than 60 years now.

At 17 S. Indiana St., it's perfectly situated for its multi-layered clientele -- a stone's throw from the courthouse square and a frisbee fling from DePauw University.

"It is sort of like a Cheers," new owner Jackie Hopkins agreed, pausing to ponder her recent indoctrination into the corner tavern world that is Moore's Bar.

"It is homey," Jay Hopkins adds from behind the bar and just below the shiny iconic Moore's tin ceiling.

Jackie and Jay Hopkins have purchased the bar from sisters Carolyn Hammond and Jenny Butts, daughters of LeRoy and Inez Moore. The Moore family owned and operated the bar from 1950, when they acquired it from the estate of Inez Moore's brother Edgar.

"It was Carlin's Tavern then," Carolyn said. "He (Edgar Carlin) passed away in 1950 and they bought it from the estate."

Carolyn and Jenny and their late sister Lois Steele (she passed away three years ago) were pressed into service as kitchen and clean-up help as soon as they were old enough. 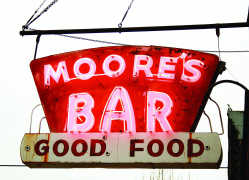 "It was a different time," Carolyn concedes. "Women couldn't tend bar unless they owned a place. You couldn't walk around with a drink in your hand. You had to sit and drink at your seat."

"And you couldn't come up to the bar and order, you had to be served (by a waitress or bartender)," Jenny added.

While several other bars dotted the landscape, most notably the Double D on the north side of the square and the Town Tavern at the northeast corner of Indiana and Franklin, Moore's had something the others didn't.

"We had the first TV," Jenny said.

"And the first air conditioning," Carolyn added, pointing out that where it has said "good food" on the Moore's sign that hangs over the Indiana Street sidewalk in recent years, the message once read "air conditioned."

"This," Jackie Hopkins interjected, "really was the place to be."

Husband Jay recalled how the storefont to the south, no longer connected to Moore's, was once the Colonial Room where you didn't have to be 21 to enter.

"I shot pool over there with Dad when I was seven or eight," he recalled.

The three Moore sisters took over the bar in the early 1980s and have fond memories of nearly 50 years of involvement at the bar even as they relinquish control to the Hopkins couple.

"I remember after the fair parade one time we had the Shriners in here," Carolyn Hammond recalled.

A drink or two and one thing led to another, and the next thing Carolyn knew, the Shriners had propped open the back door and were riding their mini-motorcycles right through the bar and out the front door onto Indiana Street.

"In their tall hats and all, it was kind of cute," she recalled. "They even left tire marks on the floor there. Of course, they were feeling pretty good."

Through good times and bad, fair weather and foul, regulars and drop-ins alike have found Moore's a comforting place.

"It just seemed like people were always here," Carolyn agreed. "During the blizzard (January 1978) we had people ride their snowmobiles into town just to come to the bar.

"And in that 'downburst' (August 1990 windstorm), we didn't have any power but we had beer iced down in the sinks and candles on the bar."

Carolyn and Jenny agreed they would do it all over again ... if they were younger. They admit slowing down in recent years and knowing it was time to pass the baton.

"It's been an experience," Jenny assured. "I'll tell you one thing, if you've owned a bar, you can handle anybody."

And even provide a shoulder to cry on when necessary.

"I always got all the sad stories," Carolyn added, "the ones who just lost their girlfriend."

And that continues today.

"I've already gotten some of that, too," Jackie Hopkins smiled.

Through it all, they will remember their interaction with the people.

"I've had a lot of people, especially DePauw alumni tell me, 'I had my first drink there,'" Carolyn said.

Generally, however, they backtrack and specify, "My first legal drink," she laughed.

Meanwhile, Jay and Jackie Hopkins have jumped into the business with both feet. Their dream has always been to retire to some place like St. Thomas, where "I'll be braiding hair and he'll be tending bar," Jackie mused.

"So maybe this is our transition."

Jackie says Jay had been trying to talk her into such a venture for about a year.

Then, after the Stellar Communities grant for Greencastle offered incentives like funding to renovate building facades downtown, they decided, "this was the business that stood out."

"If you're going to get one (a bar), this is the one to get," Jay added. "It's pretty neat that it's a place where anyone from students to judges to townspeople come, and they've been coming for a reason."

The Hopkinses hope to keep them coming back with menu additions like a daily hot lunch special and specialty sandwiches such as the legendary Moore's "hangover tenderloin," of course, and an adopted burger.

"We've brought back the infamous Billy Burger," Jackie said, explaining they got permission from Charlie Alex who created the burger at Varsity Lanes a number of years ago.

It features a 10-ounce hunk of beef with grilled onions, bacon and cheese on a hoagie bun, all smothered in a special barbecue sauce.

"It's been a big hit, word traveled fast," Jackie says, adding that once the revival of the Billy Burger was noted on Moore's website, it got 30 or 40 hits a day and even prompted a call from Florida.

"We've still been trying to get ourselves acclimated," Jackie says, noting that they actually took over on Monon Bell weekend. "Of course, the game ended up being horrible (for DePauw fans), so they started coming in early and the party lasted until 3 in the morning.

Even with that cash register calamity, they survived that opening test and ultimately got comfortable enough to share their story with Banner Graphic readers.

"There were plenty of times that first weekend," Jackie assured, "that we thought, 'What were we thinking?'"