Free beer tomorrow (get it?) 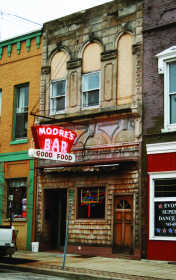 As familiar to Moore's Bar clientele as the red neon sign outside and the shiny tin ceiling inside is a placard that hangs on the back wall of the area behind the actual bar.

While that notion often makes a new customer at least initially sit up and take notice, generally he or she quickly realizes that "tomorrow" is never today. And "free beer," like tomorrow for Annie, is always a day away.

But occasionally a patron just doesn't get it.

Recently a fellow glanced up at the sign, and then started madly texting about everyone he knew, urging them to meet him at Moore's tomorrow because the beer was going to be free.

While patrons on either side of the man were about falling off their bar stools with laughter, new owners Jackie and Jay Hopkins had to intervene to set the story straight.

Another time recently, Jay answered the phone, only to hear the query "Is it free beer today?"

It sounds like the Moore's Bar version of "Who's on first?" And sometimes, like Costello responding to straightman Abbott, a person doesn't get it.

"It's just like 'tomorrow will never come,'" Jay explained.

That didn't stop a woman from recently arriving at Moore's about 11:45 p.m. and nursing a soft drink until 12:01. She then leaped into action.

"She asked, 'Is it any kind of beer?'" Jackie recalled, admitting she has been tempted to take the "Free beer" sign down.

"No, that's tomorrow," the woman was told, hoping she would get the joke and play along.

"Well, that's not how you've got it advertised," she huffed.