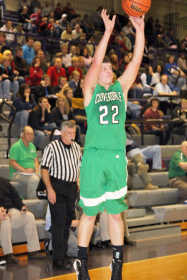 It took some last second maneuvering and big plays, but two free throws from Joe Fidler with one second left in the game saw the Clovers edge past South Putnam 46-45.

The hosts started off with three-pointers from Brandon Dorman and Chuck Strunk to grab a quick 6-0 lead before the offense stalled out, scoring only one more basket before the end of the period.

The Eagles scored their first basket at the five minute mark but outscored the Clovers 11-2 in that span to take a 11-8 lead into the second quarter.

Neither offense got out of the traps after Seth Hammond hit a three to give the Eagles 14-8 lead shortly into the frame.

Cloverdale cut the lead to as close as one at 15-14 late in the period before Hammond banked in two jumpers and Rob Gibson sliced through the Clover defense in the final seconds for a lay-up that gave the eagles a 21-14 lead going into halftime.

Things changed quickly after the break as the Cloverdale defense forced four quick Eagle turnovers, which allowed the offense to roar into life.

Shots fell left and right from Fidler and Dorman, who combined for 13 of the Clovers' 16 points in the frame.

The outburst reversed the halftime deficit as the Clovers left the quarter with a 30-26 lead, holding the visitors to five points in the period.

Cloverdale extended the lead to six at the start of the final quarter but South Putnam slowly closed the gap, retaking the lead with 2:37 to go after Logan Pell knocked down a three.

The Clovers grabbed the lead back after Zach Dorman hit the first of two free throws and Mitch Williams, who grabbed Dorman's miss, laid the ball in.

The Eagles took the lead back through two Alex Kelly free throws only to see Williams convert again on the other end with a three-point play.

Hammond drained a jumper to tie the game before Sawyer Arnold knocked down one of two free throws to take the lead at 42-41.

The second free throw from Arnold was missed, but the Eagles rebounded and Pell drove into the lane for a lay-up that gave the eagles a 44-41 lead.

Arnold would knock down one more free throw to extend the lead to 45-41 but Cloverdale was thrown a lifeline when Fidler got a shooter's roll three-pointer, cutting the lead to 45-44 with 4.9 seconds on the clock.

Gibson was fouled on the inbound with 2.9 seconds left but missed both free throws, with Cloverdale snaring the rebound and getting a timeout with two seconds left.

From there, Fidler was fouled on the inbound and drained the winning free throws, giving the Clovers their second win of the year.

"I give credit to our players and the student body. What our student body did right at the end of the game, to come over and cheer our players, means a lot to us," Rady said.

"They haven't given up on us, stayed with us tonight and our kids fought hard tonight. They stayed focused.

"Once the ball starts falling, you get a little confidence. We did a lot of shooting this week and at halftime, we thought we needed to have a little better shot selection, let the offense get the shots, and I thought that's what they did," Rady added.

"Cloverdale made plays when they needed to and I guess I didn't have our guys ready to make plays when we needed to. Congratulations to coach Rady and Cloverdale. It was a good win for them," Burgess said.

"Cloverdale did a great job. They made plays when they had to and made the shots when they needed to."

With homecoming at South Putnam tonight, Burgess was short in his analysis for what needed to happen again Riverton Parke.

Cloverdale, meanwhile, faces off for a second time against Riverton Parke. Rady said that the Clovers just need to keep moving in the right direction.

"North Vermillion is at full force, so it's going to be a tough ball game for us. In the last three games, even without a win, we've been taking steps in the right direction," Rady said.

"One game doesn't make a season either way. Right now, we're at the point where we're trying to get better and I think we're at a point where the kids understand you have to compete," Rady added.

"But give all the credit to the players tonight. It's a win for them and our student body."