By MICHAEL HADLEY, For the Banner Graphic 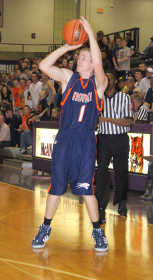 North Putnam's Kolten Everts hit a game-winning shot with less than three seconds remaining to give the Cougars a 61-59 win over GHS Friday at McAnally Center.

In a tough West Central Conference game, North Putnam was able to hold off a late Greencastle run, winning 61-59 at Greencastle High School on Friday night.

Greencastle opened up the game on a speedy 14-5 run over the first 4:24, mostly fueled by eight early points from 6-foot-7 senior Nick Hutcheson.

North Putnam quickly recovered, going on their own run of 13-2 to tie the game at 18, forcing a Tiger Cub timeout at 4:18 in the second quarter.

"Hutcheson is going to get his," North Putnam head coach Nathan Martindale said following the game. "A player like that, you can't just sit there and try to shut him down."

North Putnam clawed their way back on the shoulders of Tim Wiltermood's 11 first half points, the most important of which came in the last thirty seconds of the half.

Catching an inbounds pass, Wiltermook used a shot-fake to get his man in the air before stepping back and firing a three pointer to set the halftime score at 26-25 Greencastle.

"North Putnam deserved that one," Greenlee said, "After we got up early and they called time out, for some reason we thought we were going to cruise from there.

"I was disappointed in the way our kids responded from that point on."

The Cougars took their first lead in the second half following a Jameson Brewer hoop but Greencastle would answer with a 5-0 run to make it two-point lead for the home side. Wiltermood answered with a three of his own moments later, and the back-and-forth game rolled on in the McAnally Center.

Heading into the fourth quarter, the two sides were knotted at 45-all. Greencastle took a two point lead on two Hayden Stuckwisch free throws with just over five minutes to play, but again North Putnam would answer, using two Kolten Everts charity shots to tie it again at 52-all. Braydon Porter hit one of his many threes to push North Putnam ahead by three and a Brewer put-back made it 57-52 under four minutes. A jumper from the elbow by Wiltermood following a Greencastle extended the lead to seven points, their largest of the game.

Greencastle did their best to come back, despite poor shooting in the fourth quarter.

Stuckwisch hit another three from very long ranger after Wiltermood missed the front end of two consecutive one-and-ones. Stuckwisch tied the game with two free throws but it was North Putnam with the final say. Everts, scoring just two points through the rest of the game, hit a floater in the lane over three Tiger Cub defenders, taking the lead for the last time, 61-59 with less than three second left in the game..

A desperation heave was knocked to the floor as time expired, and the North Putnam students flooded onto the court.

"North Putnam just played harder than us tonight," Greenlee mentioned. "They played smarter, made bigger plays...You have to give them a lot of credit."

Wiltermood ended the night with a game-high 22 points, followed closely by Brewer's 18. Porter rounded out the Cougar double-digit scoring with 10.

"After that one, I don't have to tell my guys anything," Martindale added. "I think they're too excited right now."