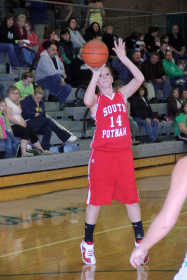 South Putnam was coming off a tough loss to Tri-West Tuesday and looking to get back in the win column. Eagles' head coach Lindsey Blackman was pleased with her team's effort on the night.

"I was happy there was no let down. That even when we built the lead, we kept on it and kept improving ourselves throughout, so that was good," Blackman said.

South Putnam got off to a quick start behind the hot shooting from Jenny Thompson. Thompson opened the game with back-to-back three-pointers and cruised to 11-point first half.

The Eagles led the Clovers 17-6 and 36-11 at the half. South Putnam's pressure was tough for the Clovers to handle. Cloverdale head coach Matthew Langdon said his team's simply wasn't ready for the South Putnam pressure.

"South Putnam just plays an aggressive defense, trapping out of it and our girls have worked hard to get better at that and there's some improvement there," Langdon said. "We just weren't quite ready tonight to play that type of game. Coach Blackman does a good job of mixing girls in and out. You can tell there was a fresh body in there throughout the whole game.

"We have a couple injuries, we don't have that depth yet, but she does a good job of mixing them out. We weren't really able to handle the pressure. At times you saw quick passes, but you could tell we weren't ready for that physical of a game," he added.

Following the break, South Putnam picked up where it left off in the first half and Cloverdale showed it still had a little fight left in them. The Eagles offense continued to roll, scoring 23 points in the third quarter, while the Clovers put up seven points.

Cloverdale's offense was able to move the ball in its half court offense, but struggled to find their shot. Langdon said his team needs to do a better job of creating more chances.

"In the past, we've held the ball too long and we've done a good job of now moving it around quick. Now it's just finding those seams and those cracks in the defense to be able to get to the hole. We can't rely on threes and we can't rely on long twos. We probably didn't shoot that bad from the field, it's just not enough opportunities," Langdon said.

In the fourth quarter, Cloverdale scored in double figures for the first time in the game and outscored the Eagles 17-15. Langdon said it's all about building off the improvements his team has shown.

"We had a good win the other night. We've seen some up and down games. We've seen the potential, so hopefully we can just build off of that," Langdon said.

Thompson scored eight points in the second half and led all scorers with 19 points. Emily Dabkowski added 12 points, with Leanna Masters scoring 11. Nikki York scored 10 off the bench. The South Putnam bench scored 27 points Friday. All 11 South Putnam players saw action and scored in the contest.

"Everyone scored tonight, which was fun. Nikki York stepped up big. (She) stepped in, Leanna got in foul trouble and that's only going to help us down the line when we know that if Leanna gets in foul trouble or she needs a break, then Nikki can step in there and do was well as she did," Blackman said.

The win was big for South Putnam and Blackman hopes the win will give a little boost to the team.

"I hope it was a confidence booster for everyone, from the starters, non-starters to the coaching staff to realize everyone can be utilized," Blackman said. "I felt like we had that early on in the year, we used everybody early and then we went away from that. I'm glad we're getting back to it.

"It felt good to get everyone in, get everyone some points and some confidence. It was a great overall team win," she added.

South Putnam will host Clay City Tuesday at 7:30 p.m., while the Clovers close out their season at home against Shakamak Tuesday at 6 p.m.