An inspiration for science and overcoming hardship

Most likely, January 5th was a day that local residents were still discussing college football bowl games, readjusting to work and school schedules after the holidays and gearing up all attempts to not break New Year's resolutions.

While it did not appear on any calendars around the office, the date Jan. 5 was declared by the United States Congress in 1946 as "George Washington Carver Day" in memory and honor of an African American scientist who had died on this date in 1943.

Since February is Black History month, it would be noteworthy to take a look at this man's life who contributed to so many things we take for granted today.

Moses and Susan Carver were owners of a small farm near Diamond Grove, Mo., who also owned one slave named Mary. Mary had two small children named James and George.

Despite being warned by a neighbor that slave raiders (outlaws who stole and resold slaves) were in the area, slave raiders would later change George's life that night when he and his mother were stolen. Moses Carver went to the rescue to find George alongside a road but would never find George's mother.

The Carvers raised both George and his brother as if they were their own children.

George was often not well in terms of his health as a child. His approach was weak and thin while commonly stuttering with his voice. Nonetheless he was a very happy child who loved plants, animals and wanted to learn. Susan taught him to read and provided much of his early education. George loved to read the Bible and he kept and read the Bible that Susan had given him until his death. 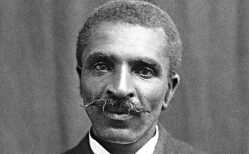 At the age of 12 he left the Carver family, walking to Neosho, Mo. hoping to attend school. A family took George in and he worked and went to Lincoln School for a few years.

Later he moved to Fort Scott, Kan. where he found another family to live with and worked to attend school for a few more years.

Later, moving often but living on his own, George found himself living in a small Kansas town with another George Carver so he added a "W" to his middle name which stood for Washington.

Though he had studied art and today his paintings hang in the Carver Museum in Tuskegee, Ala., George wanted to attend college and apply his love for plants and animals to his study.

Attending college was rare for an African-American man in the late 1800s. Through hard work and thriftiness, George went to Iowa State College in Ames, Iowa to learn and he graduated in 1896 at the age of between 36-40 (his birth year was not known for certain) years old.

George had become a well-respected scientist. He was asked to remain at Iowa State but Booker T. Washington asked Professor Carver to become a staff member and teacher at the Alabama college known as Tuskegee College that was founded in 1881. Professor Carver decided to go to Tuskegee in the college's fifth year of existence. He taught science and with the help of his students built a fine laboratory for learning.

Professor Carver was instrumental in teaching and improving soil quality through crop rotation and introduced several crops new to the area besides cotton, the South's primary mono-culture crop in those days. One of the new crops was peanuts which many are so fond of today. Another crop introduced was the sweet potato that many continue to enjoy today.

Professor Carver was a simple man. He never married nor had children. Although he could have become a wealthy scientist as Henry Ford donated significant funds to build a new lab and scientists came from around the world to learn from Professor Carver, he chose to stay at Tuskegee where he walked to work, chose for his students to be his family, and lived a peaceful life at home reading, especially the Bible given him by Susan Carver.

What a neat story where someone who started with so little was able to develop and become revered by so many. Hopefully this story will motivate others and inspire local residents to reflect on the rich history of societal contributions by those who have had such a difficult start.

Note: the Extension Office is now located at 12 Central Square in the Pershing Accounting and PNC Bank Building. Check our website www.extension.purdue.edu/putnam to view the most up to date info.

You can contact the local Purdue Extension Office by calling 653-8411 for more information regarding column topics or to RSVP for upcoming events. It is always best to call first to assure items are ready when you arrive and to RSVP for programs. While many publications are free, some do have a fee. All times listed are Eastern Time.