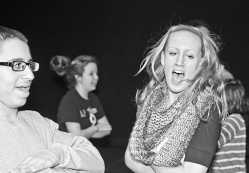 Cast members perform in a recent rehearsal for the DePauw Theatre presentation of "Mysteries ... and Small Pieces."

DePauw Theatre will present The Living Theatre's "Mysteries . . . and Smaller Pieces" from today (Thursday, Feb. 2) through Sunday, Feb. 5. The performance will be held in Moore Theatre within DePauw's Judson and Joyce Green Center for the Performing Arts.

The Thursday-through-Saturday performances begin at 7:30 p.m; Sunday's curtain time is 3 p.m. Tickets are $3 for students and $6 for adults and can be purchased by calling the Green Center Box Office at 658-4827 or emailing greencenter@depauw.edu.

Created in 1964, "Mysteries" is a unique experience for both the performers and audience members. The performers are involved in several rituals involving breathing and group improvisation. However, unlike many traditional plays, Mysteries encourages audience participation in a number of scenes including "Street Songs" and "The Chord."

The show was one of the first original works The Living Theatre created during the experimental theater movement. It seeks to ignite social change in both the performer and audience member, a common goal for many other Living Theatre productions.

Despite the show's original context and long history, its director Tim Good, associate professor of communication and theatre at DePauw, encouraged the cast to make the show their own.