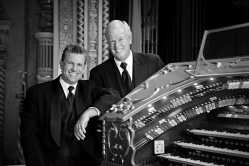 Bridging the gap between traditional piano and organ repertoire -- with original advances to more contemporary and popular genres -- Martin Ellis, on the piano, and Randall Frieling, on the organ, will perform as part of DePauw University's Performing Arts Series next Tuesday, Feb. 7.

The concert will begin at 7:30 p.m. in Kresge Auditorium, located within the Judson and Joyce Green Center for the Performing Arts and is free and open to all.

Ellis and Frieling have a rich past of performing together, and Indiana is familiar territory for the duo. Ellis hails from the Indianapolis area and is a member of DePauw's Class of 1990.

He serves as the associate director of music at North United Methodist Church in Indianapolis as well as keyboard artist and staff arranger for the Indianapolis Children's Choir.

Frieling is a professor at Anderson University and is director of music at Central Christian Church in Anderson. He is a graduate of Indiana University - Bloomington.

For Tuesday's DePauw performance, Ellis will be playing the J. Stanford Smith '36 Concert Organ. The instrument, designed and built by Hellmuth Wolff & Associates of Quebec, was dedicated in 2003.