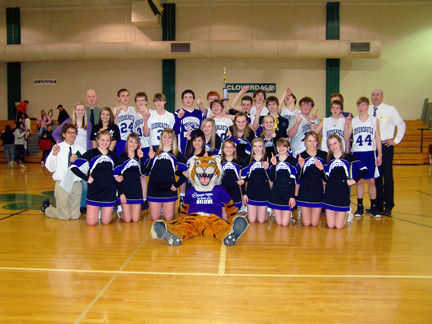 Neither side had much success in the opening period from the floor as both schools' defenses were swarming, while shots simply wouldn't fall for several players.

Both squads scored 11 points in the second quarter as Greencastle took a 20-15 advantage into halftime.

The Tiger Cubs extended their lead in the third quarter to 13 after finding their offensive rhythm, outscoring the Cougars 15-7 in the decisive period of play.

North Putnam had chances to cut the deficit in the fourth quarter but weren't able to convert in several attempts at the free throw line, allowing Greencastle to maintain their lead until the final buzzer.

Greencastle eighth grade coach Mark Lewis said that once the squad settled down they found things easier against the Cougars.

"In the first half, our defense was where we wanted it to be but at halftime, I told them we were too frantic on offense," Lewis said.

"We came out and settled down in the second half. We got the ball moving and got some early lay-ups that seemed to loosen things up."

"North Putnam stayed with us for most of the game. Up until late, it was anybody's game. Give credit to North Putnam. They hit some three point shots and they've got a good team," Lewis added.

Lewis said that after some early struggles, the squad had matured into a solid outfit.

"I was very satisfied. At the beginning of the season, we were trying to find out how to play hard all the time. We'd play hard for two or three minutes, then relax and let the other team back into the game," Lewis said.

"We worked on playing intense the entire season. I told them before the game if we played hard on defense, our offense would take care of itself."

With the squad now advancing to the high school level, Lewis said that the coaches at both levels think highly of the eighth grade squad.

"I think they'll fit in real well. I know the coaching staff is anxious to have them come in as freshmen next year. They've got big plans for them," Lewis said.

"They handle the ball well, shoot well and pass well. I think they'll be happy with the way we've trained these guys on defense and with how hard they play."

"I think they'll be satisfied once these guys get to the high school next year."