Wabash rallies to deal DePauw third loss in a row 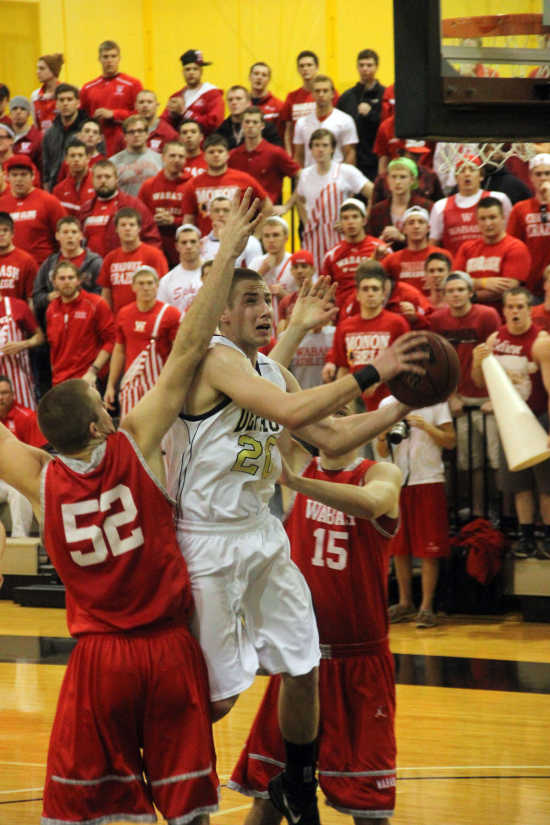 DePauw senior Sean Haseley goes between two Wabash defenders to score two of his 10 points during the second half of Wednesday's contest against Wabash.

After holding a lead over visiting Wabash for much of the second half Wednesday, the DePauw men's basketball team couldn't hold off a hard-charging Little Giants squad, falling 65-63.

Wednesday marked the third meeting this season between the two squads, with each having one of the opposing courts. For much of the game it looked as if DePauw would reverse that trend and deal Wabash it's third loss in a row. However, the Little Giants had other plans.

The two squads battled hard in the first half, with each having the lead, but it was DePauw who held the edge going into the half 25-24.

In the second half, DePauw was able to steadily build a lead, taking it's largest lead of the game at the 10:51 mark when Barry Flynn connected on a jumper making it a nine point advantage for DPU.

The final 10 minutes of the game saw both team trading leads, with two ties along the way. With the score knotted at 57-all, Wabash's Derek Bailey drained a shot from beyond the arc to give Wabash a 60-57 edge with 3:01 remaining.

The Tigers battled and cut the lead to two points three times, the final time coming with eight seconds remaining when Michael Wilkison hit a long-range bomb of his own to bring the score to 65-63 in favor of Wabash.

On the ensuing inbounds play, Wabash couldn't handle the DePauw pressure and promptly turned the ball over to the Tigers. DePauw called a timeout and met to discuss what would be the final play of the game.

The Tigers took the court with seven seconds on the clock and set their plan in motion.

They inbounded the ball and got it to Wilkison with five seconds remaining. The sophomore guard drove to the top of the key and fired a shot from three-point range, hoping to give his team the win. However, his shot caught the right side of the hoop and harmlessly bounced away as the clock went to all zeroes and the horn sounded, allowing Wabash to escape with a 65-63 victory.

The difference actually came at the line when it was all said and done. Both teams hit 23 field goals on the night, including six from three-point range, but Wabash held the edge at the free throw line 13-11.

Bailey led the Little Giants with a game-high 19 points, with Aaron Zimmerman chipping in 14 points. Andy Walsh and Pete Nicksic chipped in 11 points each in the win.

The Tigers will host Kenyon at 5 p.m. Saturday and Denison at 8 p.m. next Wednesday.