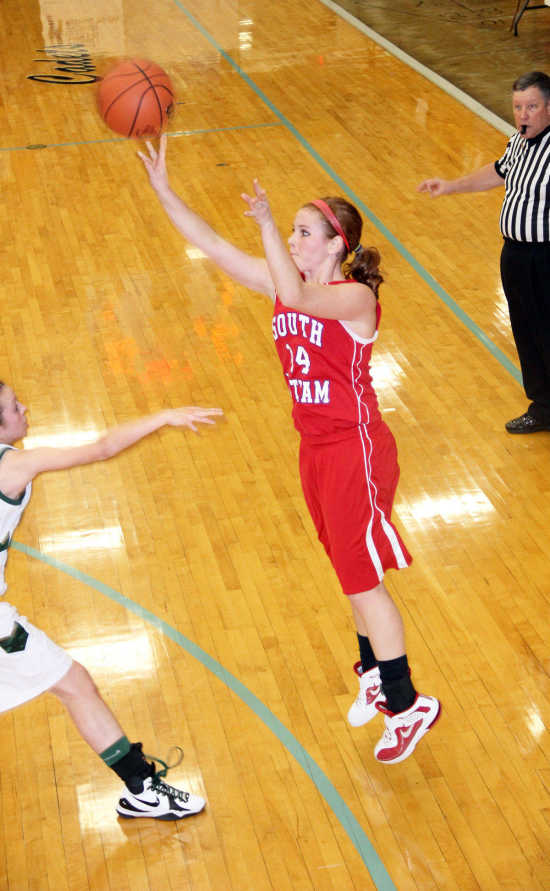 CLAYTON -- For the two opening games of the Class 2A No. 44 Cascade Sectional, South Putnam was slated as the home team on the scoreboard and played as if it was their home court. However, Saturday they donned their away jerseys and saw their run for the sectional title come up short.

South Putnam fell to Covenant Christian 49-33 in a contest that saw the Eagles not connect on a field goal in the second quarter and only able to muster 12 first half points.

Things started well for South Putnam as Jenny Thompson opened the game with a three-point field goal, but the Eagles' offense stalled and it took a late first quarter run for the Eagles to move within two points at 11-9.

Covenant Christian countered the Eagles' run with one of their own and took a 14-9 advantage into the second quarter. If South Putnam was looking to reverse its fortunes in the second quarter, it was clear early on that they had their work cut out for them.

South Putnam hit three free throws to account for their only points of the quarter, but was fortunate in the sense that Covenant Christian was only able to post nine points in the quarter. Of the Warriors' nine points, Emma Brattain accounted for seven, including two buckets from behind the three-point arc.

"It was a rough start, I'll say that," Blackman said. "It's hard to turn around and prepare for a team in 24 hours. We tried to do our best at it. We've seen them before, so we knew what to expect, we just couldn't get a handle on No. 24 (Emma Brattain) in the first half. She was too good for us in the first half and we didn't step up defensively on her."

Blackman also said her team's second quarter performance was eerily similar to the first meeting between the two back on Dec. 15.

"It was really a flashback," Blackman said. "The first time we played them, I think we had five points in the second quarter and this one we had three. We talked about keeping composure, keeping the fight and I thought we came out in the third quarter with that energy we needed to.

"We talked about defensive intensity and really picking it up on the shooters and getting out there. In the second half we seemed to limit the three-point shooting. So we were able to adjust and step up to some things at halftime, but it just wasn't enough," she said.

South Putnam took to the court in the third quarter with more intensity, but more under control as well. The offense settled down and good things started to happen.

While the points didn't come all from the field, Thompson was able to knock down another three and Ericka Minor added a two-point bucket. She also hit three free tosses with Emily Dabkowski hitting one as well. The Eagle nipped the Warriors in the third 9-7 and looked to be setting up a fourth quarter rally.

South Putnam's offense found its groove in the fourth quarter, hitting five field goals in addition to two free throws, but Covenant Christian continued plugging along. The Warriors outscored the Eagles 19-12 in the final stanza, halting the Eagles' quest for a sectional title.

Mattie Varvel and Leanna Masters led the Eagles with six points each in the fourth quarter. For the game, Thompson led the way with nine points, followed by Varvel with eight, Masters with six and Minor with five. Dabkowski added four and Alex McHugh contributed one point.

South Putnam went from a 2-17 squad to a 15-8 sectional contender in a year's time and Blackman said a quad of special seniors made it possible. Departing are seniors Dabkowski, Thompson, Minor and McHugh.

"That's what we just talked about in the locker room," Blackman said of her seniors. "They've been an amazing set of four leaders in the example that they've set. We've went through, we just talked about it, no one understands what we went through from last year to this year in the sense of the breakdown of the team and the rebuilding of the team. The seniors set the example and set that leadership that we can work through anything if we can become a team."