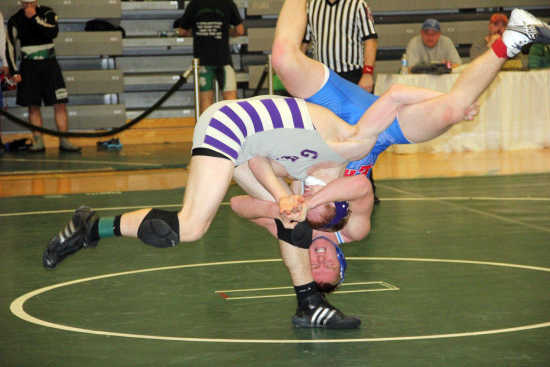 Greencastle junior Carter Lewis will compete at the IHSAA State Tournament tonight at 6 p.m. Lewis has amassed a record of 33-9 and will go against Merrillville's Darryl Peppers to open his bid for a state title.
Order this photo

For Greencastle junior wrestler Carter Lewis, his high school career on the mat has been a steady progression. This year, that progression has led Lewis to the IHSAA State Finals at Banker's Life Fieldhouse and a few short matches from achieving the goal that every high school wrestlers shares -- a state title.

In his freshman season, Lewis placed sixth at the Avon Sectional, failing to advance to regional. The following year, he placed third, earning a trip to the Mooresville Regional, but wasn't able to move on to the semi-state round. All that changed this year.

This season, Lewis charged into the sectional and placed third and repeated his performance the following week at regional. In his first trip to the Evansville Semi-State, Lewis earned a fourth-place finish, knocking off the No. 5 and No. 15 wrestlers in the state in the process.

The junior feels fortunate about beating two tough opponents en route to punching his ticket to the state match.

"It truly is an amazing feeling. Everything lined up perfectly and I feel so fortunate to move on to state and represent Putnam County," Lewis said.

Lewis said the biggest difference between this year and last year comes down to wrestling at his natural weight.

"Not cutting weight has been a huge part of my success. I feel much more healthy and stronger," Lewis said.

Sticking to the age-old adage, "if it ain't broke, don't fix it," Lewis has kept his routine the same leading up to state.

"My coaches and I have been watching film, but I really just want to get out there and wrestle my match," Lewis said.

He said the impact of wrestling at the highest level didn't hit him until earlier this week, but he described the feeling as unimaginable.

Having reached the state finals in his junior year, Lewis knows the expectations for his senior season are going to be elevated.

"Well there will be a little more pressure on me next year and I feel I will be able to use that to my advantage," Lewis said.