Dream of state title ends with first round loss for Lewis 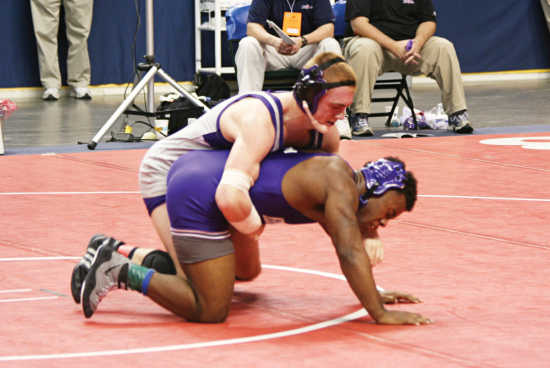 INDIANAPOLIS -- Greencastle junior Carter Lewis' first foray into the IHSAA Wrestling State Finals would end up a one and done Friday night at Bankers Life Fieldhouse.

Lewis was matched-up against Merrillville senior Darryl Peppers at 170 pounds. At 5'5", Peppers was a different prospect from the rest of the field.

After a scoreless opening period, Lewis scored the first point of the match on an escape, but was taken down twice in the period to fall behind 4-3.

After being reversed in the early part of the third period, Lewis escaped but found Peppers difficult to get to the mat.

Peppers recorded three more take downs in the round and Lewis fell in a 15-6 decision.

After the match, Greencastle head coach Matt McComish said that the season, even ending early at the state finals, was a success.

"There were a couple of moments there during the match that I thought we were real close to getting Peppers on his back. It just didn't happen for us," McComish said.

"When you get to this point in the season, there are no easy matches. Getting to state is an accomplishment in itself."

"I'm happy with our teams' progress. I think we've worked hard. We'll be going back and working on fundamentals and adding a few more things in now that they have some more seasoning," McComish added.

McComish said that for the coming season, it would be a boon for the rest of the squad to be able to learn and work with a state qualifier.

"Really, we have to get to work during the offseason and wrestling some folkstyle. Overall, I'm happy with the season," McComish said.

"Having a returning state qualifier gives us some perspective. It gives us somebody in the room they can look to and say, "Hey, he did it." That experience will be good for the whole team."

Lewis afterward said that making the finals was a boost for next year.

"It was an amazing feeling. It's one of those feelings you can't imagine until you actually in it and it takes your breath away the second that you realize you're going to the state finals, where everyone wants to be," Lewis said.

"I got a lot of experience that will help me for next season. I know what I need to work on. This showed me that I need to get into the weight room to get ready for next year."

When asked what it would do for the rest of the squad next season, Lewis said it would be encouraging for the team.

"It will help us challenge ourselves and our teammates to go further in the state tournament," he added.