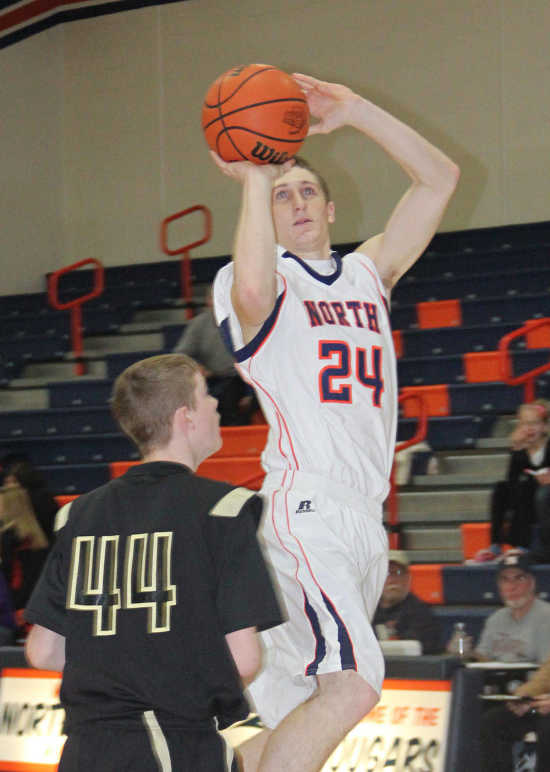 North Putnam's Jameson Brewer led all scorers with 23 points as the Cougars knocked off Covington 72-62 Friday.

ROACHDALE -- North Putnam opened Friday's contest against Covington with a hot hand, netting 28 first quarter points en route to a 72-62 win over the Trojans. The Cougars improved to 7-12 with the win with sectional rapidly approaching.

Both squads come out firing up shots beyond the three-point arc as they combined to go 10-for-10 from distance in the first quarter. North Putnam's Jameson Brewer and Tim Wiltermood hit two long-range bombs, with Braydon Porter adding one of his own.

The Cougars led 28-17 after one quarter and continued their aggressive play in the second. Brewer poured in eight points in the quarter to give him 18 at the break. North Putnam took a halftime lead of 43-25 into the locker room and was in complete control of the game on both ends of the court.

The Cougars cooled off in the second half and that allowed the Trojans to begin a slow crawl back into the game. The Trojans outscored the Cougars 16-12 in the third and cut the lead down to 14 points at 55-41.

North Putnam head coach Nathan Martindale acknowledged his team's hot start as well as their second half cool off following the game.

"We shot the ball well," Martindale said of the first half. "I thought we got ourselves some good looks. We were aggressive in the offense and offensively on the rebounds, I thought we did a nice job too. Jameson got in there and got him some off the offensive boards and that's always key.

"And we had guys step up and hit shots. As our legs started to falter there in the second half, we got enough just to get through it and we'll take a win any time we can get it," he added.

Covington battled inside and came away with multiple offensive rebounds in the fourth quarter and cut the lead to single digits, but didn't have enough steam to overtake the Cougars. The Trojan won the battle of the fourth quarter 21-17, but North Putnam won the war of the game 72-62 for its seventh win.

Martindale noted some things he team needed to do better in the second half, but praised their effort down the stretch.

"I thought we could have blocked out better and I thought we left some there and that's how they got themselves back into the game," he said. "But we did get the key rebounds when we needed. Nate (Bryan) got a big rebound there on the baseline and ended up getting fouled. Jameson cleared a couple boards, so we were able to get the rebounds we needed.

"If we can clean that up and keep the offensive rebounds down to a low, we'll be alright. We just have to work on that."

He also said the team had great energy on the night and his team was dialed in on both ends of the court.

Brewer led all scorers with 23, as Wiltermood added 19 and Kolten Everts chipping in 10 points. Bryan had eight points, with Porter and Nauert adding six points each.

The Cougars have one game left before the start of sectional and Martindale said the team would be focusing heavily on defense leading up to tournament play.

North Putnam will host Tri-West to close out their regular season Tuesday with the junior varsity tipping at 6 p.m.