Firebaugh, Gould move on from sectional 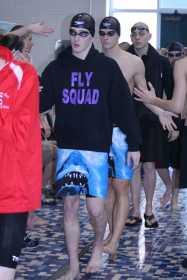 Maybe, but small fish can swim pretty fast too.

If the Putnam County boys' swim teams were supposed to be intimidated going against bigger competition from Hendricks County and Terre Haute, no one told Greencastle's Nash Firebaugh or South Putnam's Sam Gould. 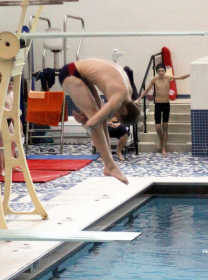 Firebaugh swam a 51.59 to win the butterfly and advance to the state finals. Gould placed third in diving with 319.60 points, good enough to advance to regional competition.

Firebaugh, a sophomore, came into the sectional finals seeded second, but everyone in the natatorium seemed to know he'd post a low time. It was just a matter of doing it.

"It's hard to go into a sectional meet with your mind on state. Both mentally and physically, it's a hard preparation," GHS coach Kent Menzel said. "So we took the risk of not shaving Nash; we took the risk of not resting Nash. We knew what was going to happen today, but we were just waiting for it to come, and of course it did come."

Firebaugh's seed time of 54.05 meant little, as he shattered it by nearly 2.5 seconds. He cruised to a seemingly effortless 1.3-second margin of victory over Avon's Dylan Ferguson.

Even more impressive, the 51.59 beat's the state finals cut time by 1.1 seconds, putting Firebaugh in elite company at the state finals. He enters Friday's meet as the ninth seed.

"That was his lifetime best 100 fly, and now he gets to rest. Next Friday he gets to shave," Menzel said. "We're looking for really great things both Friday and Saturday of next week from him."

The preliminaries of the state finals begin at 6 p.m. Friday at he IUPUI Natatorium in downtown Indianapolis.

The advancement process was slightly more stressful for Gould. The senior spent most of the day on the heels of Plainfield's Evan Becker, who led and ultimately won the competition.

However, an over-rotation on his final dive -- a forward dive with two somersaults in the pike position -- led to a failed dive and some stressful moments for diver and coach.

His 10-dive score of 319.60 was still enough to finish third, though, as only Alex Davis of Terre Haute South was in a position to catch Gould. With the top four divers advancing to regional, he remains in the competition.

"He still has more room to grow," Eagle coach Matthew Edwards said. "This was just another meet, really. We wanted to do well in this meet. Our goals have been all season to move on past regional. Last year he got to regionals and that was nice. He got to experience what the meet was like, what it's all about."

The score was also good enough for Gould to again establish a personal best for 11 dives.

"He still broke his own record by over 10 points," Edwards said. "He was in the running for first place, and I wanted him to get it just as bad as he did because he deserves it.

"He's one of the most hard-working athletes I've ever seen, and it's not just that, it extends into the classroom as well and other extra-curricular activities."

Now the attention turns to the Brownsurg Regional, set for tonight at 6 p.m. at Brownsburg High School. Eight of the 20 divers move on to state. Gould, even with his failed dive, had the 11th best sectional score of the divers.

The coach like's his senior's position and chances.

"Hopefully we can push on past. Top eight go to state, and that's what we're pushing for," Edwards said.