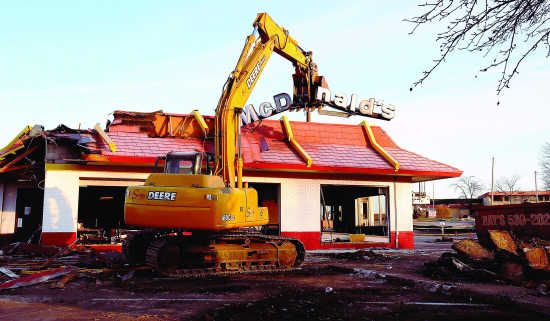 Just before 8:15 a.m. Monday, demolition crews begin tearing down the old Cloverdale McDonald's at U.S. 231 and the Interstate 70 interchange to make way to a more modern, expanded McDonald's restaurant on the site. Jedele Enterprises hopes to be in its new building by May 10 or 17. (Courtesy photo)

CLOVERDALE -- What opened as a treat among tricks on Halloween 1979 came back to earth in a cloud of Presidents Day dust Monday morning in Cloverdale.

In less than 90 minutes, the Cloverdale McDonald's, a landmark atop the knoll at the U.S. 231 and Interstate 70 interchange, was reduced to piles of rubble, recyclables, and roll-off dumpsters.

However, a more modern and bigger McDonald's is scheduled to rise from that dust in time to open anew on the same site in mid-May.

"We're looking at May 10," owner Bob Jedele told the Banner Graphic Monday. "Or maybe May 17."

Of course, weather will play a factor in that ambitious timetable. But inherent in that optimism is Jedele Enterprises' decision to again use the McDonald's-tested, McDonald's-approved contractor, CFH Enterprises of Knightstown, as it did on the recent Greencastle remodeling and third-window project.

"It's not like building your own house," Jedele stressed. "We were actually constructing right now as we were destructing, putting in temporary electric and temporary plumbing."

Jedele's crew also was busy separating the demolition pieces into piles of asphalt, concrete and metal after the building was leveled.

"We try to recycle as much as we can," advised Jedele, who owns seven central Indiana McDonald's restaurants (Cloverdale, Greencastle, Moores-ville, Hazelwood, Brazil-Pilot and two in Crawfordsville).

The Cloverdale McDonald's closed at its regular time on Wednesday night, giving the staff Thursday and Friday to move itself and the equipment out in preparation of Monday's demolition.

The new facility will have an increased seating capacity, expanding from 108 to 120 seats. Comfort will also be increased with the new dining area designed with more square feet per seat.

The more modern dťcor that will emerge will feature the "new arcade look" McDonald's has been employing at sites like the new restaurant on the west side of Plainfield.

Cloverdale will also get a third delivery window and a dual-lane drive-through, as Greencastle already features.

"We will open using a new system, 'Dual Point,'" Jedele added, "where the customer will place an order at one location and move to another to pick it up."

McDonald's new inside counter method is seen as "more efficient and less confusing to the customer," Jedele added.

Demolition work started before 8:15 a.m. Monday, and by 9:30 a.m. the restaurant had been reduced to rubble.

Jedele had envisioned delays for inspections and paperwork during the process, but praised local authorities for essentially eliminating those issues.

"Apparently," he said, "Putnam County is a lot easier to deal with than other places. The city and county were extremely cooperative in helping us make this all happen. I want to thank everyone for helping us get it done in such a timely manner."

Yet to come for Jedele and company later this year are the planned expansion of the Greencastle store and a major rebuild of the restaurant on the south side of Crawfordsville.