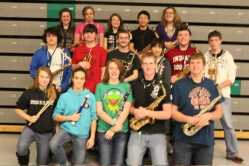 The Instrumental Music department at the Cloverdale School Corporation has several performance opportunities for talented hardworking students involved with the program.

Cloverdale's Winter Drumline will be performing an original composition by Instructor Rusty Bottemley. The unit has been an Indiana Percussion Association State Finalist the past two years. The group has 21 Cloverdale students and eight Monrovia students. They will perform in the Percussion Independent A division. Upcoming performances for the contests at Pendleton on Feb 25, Mt. Vernon/Fortville March 10 and Avon on March 17, State Finals are March 24 at Ben Davis.

The Cloverdale Winter Guard has been participating in Indiana High School Color Guard Association contest this winter. The group performed its show, "Anger Management" at a recent home basketball game. The program continues to mature and progress under the direction of Mrs. Angie Raisor.