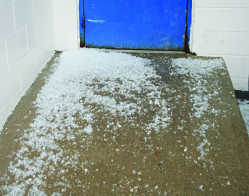 This marble-sized hail piled next to the walls of the Banner Graphic building Friday afternoon is just a small example of the storm that hit the county. Some areas of Putnam County reported nickel- to golf ball-sized hailstones.

As reports of devastating tornadoes in Southern Indiana and around the country continued to roll in Friday evening, Putnam County residents could look around and count themselves fortunate.

"We just got lucky," Chris Edwards said. "It didn't come together today in Putnam County, but there were multiple tornadoes on the ground in Southern Indiana.

"Today wasn't all that eventful. It could have been."

While there have been no confirmed reports of tornadoes in Central Indiana, Edwards said the system that passed over Putnam County Friday morning did produce some tornado warnings not too far to the east.

"Hail was pretty much the limit of it," Edwards said. "That warm front just didn't quite get to us in time before those storms arrived to increase their structure to produce tornadoes. Those storms did run into that air mass in Boone County and started to produce tornado warnings. Whether they are actually confirmed or not, we'll be finding out in the next few days."

The first reports of hail in the county were at approximately 10:30 a.m. Edwards said the system made a line from Reelsville, through Greencastle on northeast to the Bainbridge area. He said hail reports came in at many points southeast of the line.

"A lot of the hail was at least nickel-sized and some places the storm would intensify into golf ball-sized hail," Edwards said.

Two of the reports of larger hail during the morning were from a half mile east of Belle Union and just north of Bainbridge. Both locations were reporting golf ball-sized hail.

After several calmer hours of weather, things intensified again in the afternoon.

"It was pretty much the same case with the line we got around 2 p.m. It was some more isolated hail reports around Belle Union and just south of Greencastle."

While no reports were available Friday evening of the extent of the hail damage, Edwards again stressed that we avoided the bigger problem -- the wind.

"We have no wind damage reports and, of course, no tornado reports," he said.

Edwards said the National Weather Service was on alert for the possibility of a much stronger outbreak in Central Indiana on Friday.

"There was PDS (particularly dangerous situation) watch box out that did include Putnam County early Friday afternoon. It's the most severe (advisory) that the Weather Service issues," Edwards said. "The last time we had those were Joplin, Mo., and the southeast tornado outbreaks last April. We just missed it again this time."

The severe weather specialist emphasized that residents should not be lulled to complacency by another near miss in the county. The last official twister report in Putnam County was July 8, 2003, so the area has been fortunate for nearly a decade.

"As history has taught us, those are just fortunate years that we get by with," he said. "Who knows? Next week we might run out of luck."

The key to safety is to remain vigilant and always treat severe weather advisories with respect.

"Even though 60-70 percent of our tornado warnings are false, there's still that chance to get a tornado," Edwards said. "Everyone needs to take the warnings seriously. It's up to them to stay safe. We can give them the warning and the information, but it's up to them to protect their own lives."

In 2011, Indiana set a record with 72 tornadoes in the state, blowing away the old record of 49 set in 1990. Edwards said the state is off to another fast start, having nearly reached the annual average of 20 tornadoes before Friday's storms even hit.

For all the nice days it has brought, the mild winter also has some drawbacks.

"It's just been a very mild winter and we're getting a quick start on the severe weather season," Edwards said.