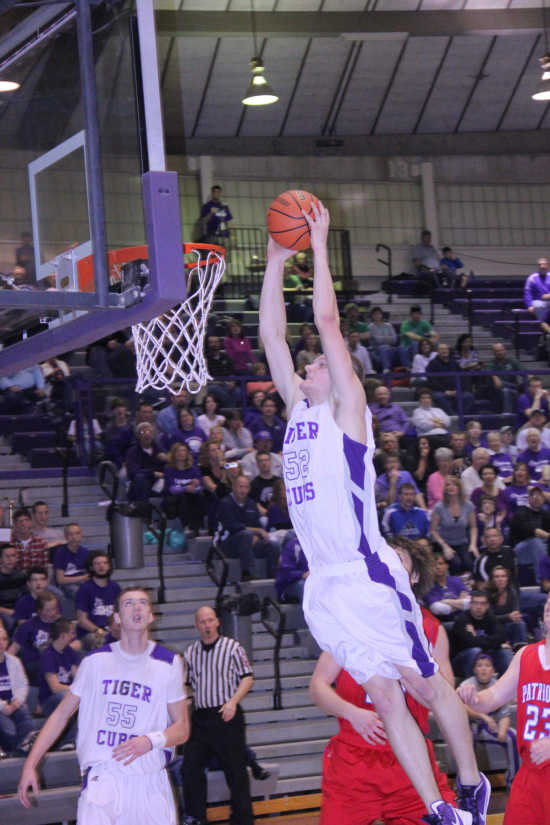 GHS senior Jesse Tesmer goes up to throw down a monster dunk in Friday's game against Owen Valley.
Order this photo

After experiencing a thrilling win in its opening game of the 2011-12 sectional, Greencastle struggled to find a flow in its IHSAA Class 3A No. 28 sectional semifinal match-up against Owen Valley, which results in the host Tiger Cubs being bounced from the tournament 57-46.

The Tiger Cubs could never find its footing on offense as it struggled to find a rhythm something head coach Troy Greenlee addressed following the game.

"I don't think we ever got in a flow -- I really don't," Greenlee said. "I think the only time we did it a little bit was when we changed up defenses a little bit and got them out of their rhythm. In our half court trap and we were able to get some steals and get them to miss some shots and we got back into them game. That was about as close to rhythm as we got all night."

He said the credit goes to the Patriots, as it was their pressure that never allowed his squad to get comfortable. Greencastle noticeable had issues finding the pace of play it would take to do some damage to the Patriots.

"We played a little too quick of a pace," Greenlee said. "We tried to make too many tough plays, too many hard decisions to take advantage of what they were doing. There were openings there, but the way they were playing us and pressuring us so hard, we just turned the ball over too many times."

Greencastle enjoyed an early lead in the game, but three consecutive three-point field goals from Owen Valley's Kaleb Oldham made the score 15-9 in favor of the Patriots. Owen Valley led 17-12 after one quarter and extended it to 10 points, 28-18, at the break.

In the third Greencastle began to find its offensive stride as Nick Hutcheson scored eight points in the quarter and led the Tiger Cubs to a 14-point quarter. The Tiger Cubs cut the lead to 40-32 after three quarters and their best was yet to come.

Greencastle found the offensive flow that had eluded them in the first three quarters and started to mount a charge in the final quarter. GHS began the quarter by outscoring the Patriots 8-3 to trail 45-40. Following an Owen Valley bucket, Greencastle's Trevor Huber found Jesse Tesmer with a tough pass to pull GHS within five once again.

On the next possession, Tesmer's basket cut the lead to three points, but that would be as close as the Tiger Cubs would get. Owen Valley knocked down free throws when it need to and closed the game on a 10-2 run to lock of the win 57-46.

Tesmer provided one of the biggest moments in the fourth quarter for Greencastle as he took a pass in the lane, soared above everyone and dunked the ball with authority.

In the fourth quarter, Tesmer and Hutcheson accounted for 12 of Greencastle's 14 points. Greenlee commented on the duos performance in the game and down the stretch during the season.

"Those two guys have really been tremendous here late in the season," he said. "Jesse is a kid that has really come into his own in the last quarter of the season and done some things quite frankly I didn't know he was capable of doing. I was really proud of the way he played tonight and the last half of the season.

"Nick I think really showed he wanted to win that game tonight. We just didn't make enough of the plays we needed to make. Again you have to credit Owen Valley for what they did. It comes down to making play and I don't think we did that enough tonight," Greenlee said.

Greencastle bids farewell to a senior class that has done some good things for the GHS basketball program over the course of their high school careers.

"It's been a lot of fun coaching these guys," Greenlee said. "Nick, a lot of people have heard about his accomplishments on the floor, but we've had a lot of guys (make an impact). You can go down the line. Jesse and what he's meant to us this year. Brad Haussin has had some huge games for us. Trevor Huber has had some really big games. He had 18 in the other night in our first sectional game.

"I thought Michael Muncie came in and I thought almost pulled it out for us in a lot of ways because he did so many things. He got his hands on a lot of balls and those kinds of things. But we weren't able to get over that hump and never could get into a flow offensively," he added.

Greencastle ends the season with a record of 13-9.

Owen Valley will play Edgewood in the final of the IHSAA Class 3A No. 28 sectional tonight at 7:30 p.m.

IHSAA Class 3A No. 28 Sectional