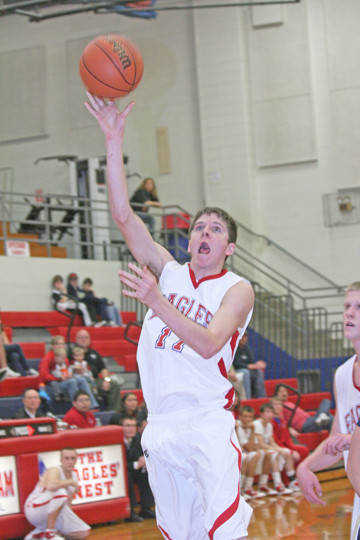 South Putnam's Justin Bumgardner was one of four Eagle players who scored in double figures in Friday's sectional semifinal. Bumgardner had 13 points on the night.

The first semi-final game of the IHSAA sectional No. 44 pitted hosts South Putnam against Cascade.

The Eagles had already been beaten twice by the Cadets; one by 24 at Cascade and by 13 at home in the Eagle Holiday Classic.

South Putnam, however, was in no mood to lose a third time, using a 14-5 third quarter to help expand a three point halftime advantage en route to a 72-60 win Friday night.

The Eagles came out of the gates firing with Alex Kelly leading the early charge, scoring all eight of his points in the opening few minutes of the game.

Down by five at 17-12, Cascade scored the final seven points of the quarter to take a 19-17 advantage into the second period.

Again, the hosts came out stronger, outscoring the Cadets 10-3 over the opening five minutes. Cascade responded with seven straight points to tie the game at 29-29.

Two late Eagle baskets, including a Rob Gibson lay-up at the end of the half allowed the Eagles to take a 33-30 lead into the break.

The pattern repeated itself in the third as the Eagles stretched their lead out to nine but, unlike in the first two quarters, kept the lead from shrinking by holding Cascade to five points in the quarter.

Sawyer Arnold ended the quarter with a bang for the Eagles, draining a long three pointer at the buzzer to give the Eagles a 47-35 lead heading into the final period.

Cascade, who only hit 10 field goals in the contest, half of them three's, could not find the offense to close the gap any closer than eight in the final minutes of play.

The Eagles were happy to trade points and were not content to sit on the lead, expanding the gap to 17 late on before easing off late.

The win puts the Eagles in the Sectional No. 44 final, a position they have not been in since the 2002-2003 season, when they claimed their last sectional title.

South Putnam head coach Troy Burgess credited the defensive side of play for giving the Eagles a chance for victory.

"It started on the defensive end. We changed some things up defense and had a pretty good idea of what we wanted to do," Burgess said.

"I had talked to an old coach who had some ideas on a defense we could mix in tonight. We put that in this week and our kids bought into it."

"Rob did a tremendous job chasing Josh Hopper around. The other four guys did what they had to do. It was a little bit of a gimmick defense but the kids bought into it and played extremely well on that end of the floor."

"The credit goes to our kids. What a tremendous job they did tonight," Burgess added.

Burgess also said that a quick pep talk helped in the third quarter.

"I thought Cascade did a great job coming out of timeouts. We'd make a run, they'd call a timeout and they would come out and make a run," Burgess said.

"With about three minutes in the third quarter, we went on a run and they called timeout. This is where coach came in to play. We told the kids they'd made a run after every timeout because (Coach Chris DuBois) is doing a better job than me."

With a smile, Burgess added, "I said 'Here's my coaching advice: Don't let them make a run.' The kids got a laugh from it and they went out and answered it by building up the lead a little bit more."

South Putnam faces Speedway in the sectional final Saturday night. Burgess said that the experience from Friday night should be useful for the Saturday tilt.

"We've got to be able to try to control the tempo a little bit. We know Speedway likes to get out and run, so our transition defense has to be good. I thought it was pretty good tonight," Burgess said.

"We've got to take care of the basketball. Speedway likes to pressure and I thought we did a fairly nice job of handling that until late tonight. They haven't been in that situation much before."

"The good thing is come Saturday night we'll have already been in a pressure situation late where we have a chance to win. Tonight will help us if we're in the same situation."

IHSAA Class 2A Sectional No. 44

Next game-- South Putnam will host Speedway in the IHSAA Class 2A Sectional No. 44 final Saturday evening at 7 p.m.