No. 4 DePauw upset by Carthage in NCAA second round 53-48

By MICHAEL HADLEY, For the Banner Graphic 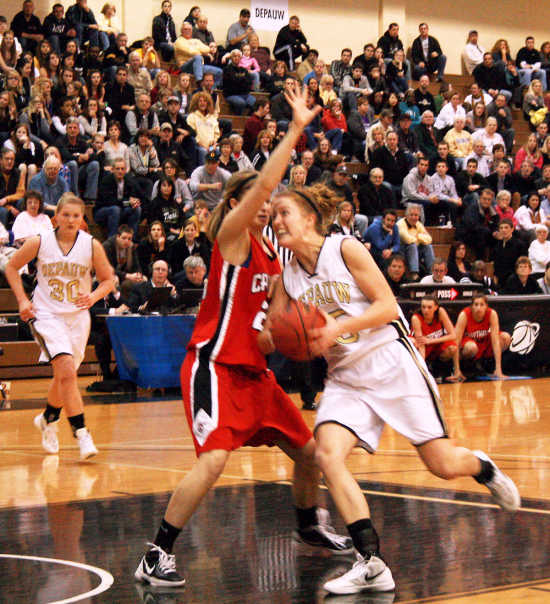 Nervous energy filled the building as both teams took the floor at Neal Fieldhouse. Carthage opened the scoring early when Allison Groessl tossed in a bucket from the left block. After a couple DePauw mishaps, Groessl again scored, this time a superhoop from the left elbow to put the Lady Reds up five.

DePauw finally got on the board when junior Ellie Pearson made a cut on the baseline for an uncontested layup. But Carthage answered right back when Cailee Corcoran scored to make it 7-2 Lady Reds. 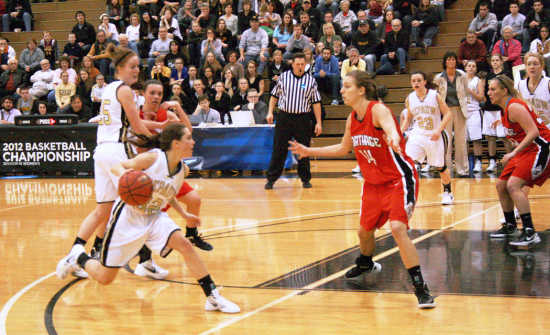 Over the next six minutes it was all Tigers as the home side went on an 12-3 run, fueled not by hot shooting but instead by aggressiveness on the offensive glass.

"Our team really buys into rebounding the basketball," DePauw head coach Kris Huffman said following the game. "And our guards really got into the action this last weekend."

The teams traded baskets down the stretch, neither side leading by more than three after the early run from DePauw. The Tigers shot only 30.3 percent in the first frame, matched by a near-doubled effort, 55.6 percent, by Carthage.

Both sides came out firing in the second half, trading a pair of left-elbow superhoops before settling into a more settled half court set offense. But it seemed DePauw had left its defensive intensity in the locker room. Carthage bolted out to a five-point lead, the biggest margin since 7-2, forcing a Tiger timeout with 13:19 left in the game.

DePauw would chip away from the free throw line, hitting four straight before an Ali Ross three-pointer from the right elbow put the Tigers ahead for the first time since the first shot of the second half. Alex Gasaway swished a three from straight on in transition, putting DPU in the lead 41-36 and forcing a Carthage timeout at 9:13.

Diana Jacklin stopped the bleeding for a moment with a floater along the right block, but DePauw matched it on its next possession.

Carthage showed their determination, and clawed its way back into the game over the next four minutes. A 6-2 run had the Lady Reds back within one, but Katie Walker's first three-pointer of the game pushed the Tiger lead back to four with 3:39 remaining.

The Lady Reds scored the next five, forcing a timeout from the DePauw bench. Jacklin created for herself on the right block to bring the lead within two, and then Stephanie Kuzmanic hit a straight-on three that forced the stoppage with 1:21 remaining.

With 40 seconds to play, DePauw couldn't find a decent look and missed a wild shot from long range as the shot clock expired. Dani Ripkey took an opportunity off of a nicely timed screen for Carthage, nailing a long two-point shot with 20.6 seconds remaining in the game.

The Tigers again missed a difficult three-ball, but were given new life when Kuzmanic was whistled for a foul under the basket. Savannah Trees got the ball from Kate Walker on the ensuing inbounds play, but she stepped out of bounds attempting to gain better position on the court.

Kuzmanic was fouled immediately by Ross on the Lady Reds inbound and she put the game out of reach with two free throws.

What kept the game close was rebounding. In the first half alone it was DePauw leading the way with 23 rebounds, 15 of which came on the offensive glass for a mindboggling 65 per cent offensive rebound rate. For the game, the Tigers outhustled the Lady Reds 41-19 on the glass.

Despite the impressive performance, the Lady Red's 50 percent shooting night would prove too much for DePauw to overcome.

Walker was the only Tiger to score more than three buckets, hitting four of 10 attempts from the field.

"We ran into a very good Carthage team today," Huffman said, "I thought we stuck to our game plan well, rebounded well, but we just could not get the ball to fall on the offensive end."

For DePauw it was Walker leading the way offensively, scoring 13 points and nabbing five rebounds. Pearson pulled down 11 boards for the Tigers, and Katie Aldrich had nine points to go along with her eight rebounds. DePauw failed to score over the last 3:53.

Ripkey paced Carthage with 15 points, followed by Groessl and Jacklin both with 10 each. Jacklin had seven rebounds, four more than the next closest Lady Red. Carthage finished 20-40 (6-12 three-pointers) from the field as a team, pulling down only one offensive rebound.

DePauw finishes the season 27-2, losing for the first time since a 52-47 loss at Franklin in the second game of the year. Carthage will face Centre College in the Sweet 16.

"I'm very proud of this team," Huffman added, "They were the hardest working team I've ever coached."

"I'm always thinking about next year," Walker said of the future. "It's always a goal to get better and advance past the first two games, something I've never done since I've been here."