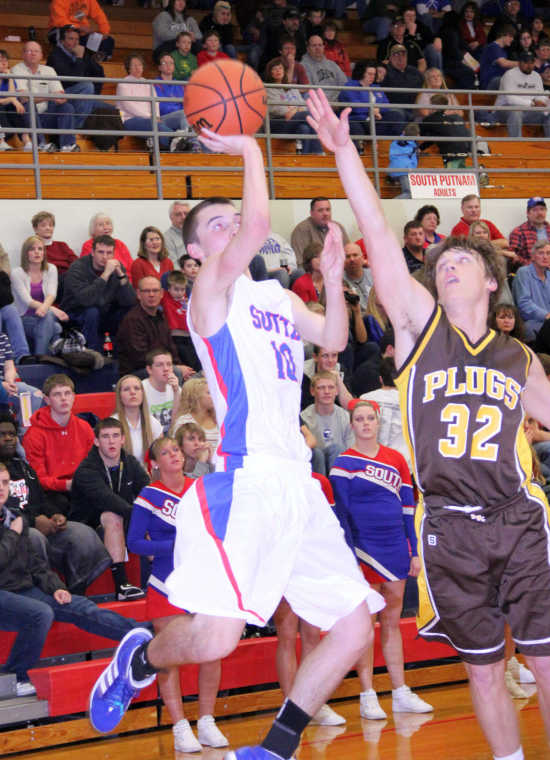 South Putnam senior Seth Hammond hangs in the air to get a shot off against Speedway Saturday.

IHSAA Sectional No. 44's final pitted host South Putnam against Speedway for the right to advance to the Connersville Regional next Saturday.

The Sparkplugs jumped on the hosts from the onset to take a 77-59 victory and win the school's first sectional title since the 2001-02 state championship season.

The Eagles had not beaten Speedway in the 11 meetings the two squads had after the Sparkplugs joined the WCC nor would they get one Saturday night when the visitors came out firing.

Freshman Anthony Jones buried three straight three-pointers to open the game for Speedway, rocking the hosts before they had settled into the game.

The Eagles struggled early with the full-court press of the Sparkplugs and found themselves in a deep hole before a Rob Gibson steal and three-pointer helped spark a 7-0 finish to end the quarter.

Trailing 16-11, South Putnam began to expand on defense to meet Speedway players farther away from the basket.

That allowed the Sparkplugs to drive inside and helped propel them on a 14-2 run and establish their largest lead of the first half at 30-15.

South Putnam whittled the lead down to 10 but a late score from Justin Brent pushed the lead out to 35-23 entering halftime.

After giving up the first four points coming out of the break, the Eagles went on an 8-0 run to close the gap to 39-31, the closest South Putnam would come for the rest of the contest.

The Sparkplugs countered with an 11-2 run to build up a 17-point lead and went into the final period of play up 54-40.

Any Eagle rally was being answered by the Sparkplugs and as the quarter went on, the shots from the hosts became more and more desperate.

Despite knocking down seven threes in the game, the Eagles could only muster nine total field goals and found themselves falling at the final hurdle as the Sparkplugs won their first sectional title in 10 years.

"The three things we knew that had to happen tonight was that they couldn't shoot the ball well from the perimeter, we had to block out and rebound. And we had to make free throws," Burgess said.

"We were 0-for-3 in those areas. They shot the ball extremely well from the three-point arc. That's something they haven't done well all year long.

"When they did miss, we weren't able to box them out. Their athletes just made plays. When we got to the foul line, we just missed too many free throws," Burgess added.

Despite their struggles, Burgess was still pleased with his team.

"We weren't able to do those three things, but I am so, so proud of our kids. I'm extremely proud of them.

"If you would have told us back in June when we started our workouts that we'd be playing for a sectional championship, not too many people outside this gym at that time would have ever given us a chance," Burgess said.

"They came a long way. Our five seniors did a tremendous job of leading us this year and the underclassmen followed suit. I'm very proud of them."

"It does play with your psyche a little bit. We spent all morning talking about packing the zone in and make them shoot it. We didn't feel they were very good perimeter shooters," Burgess said.

"Jones hits one and we thought that's OK. He hits a second and the guys start looking around and when he hits the third, I've got five guys looking at me saying, 'Coach, I think you're nuts. They're pretty good shooters.'"

"You have to give Speedway the credit. We felt like we had to keep them out of the lane. They were just too athletic for us when they got the ball in the paint," Burgess added.

"We had to keep them out there and shoot the perimeter shots and, to give Speedway credit, they did that and made them. When we had to go man, they were able to attack us, which is what we feared."

As the season concluded, Burgess took a moment to reflect on the accomplishments of the squad and the five seniors.

"It starts with our five seniors, Rob Gibson, Seth Hammond, Alex Kelly, Alex Eickhoff and Justin Gorham. Those kids did a tremendous job of leading us and our young kids really followed suit," Burgess said.

"To get from where we were when we started to where we are now, it was a tremendous year for us. I think we'd all have liked to play one more weekend but to get to this point, I'm very proud of them.

"What we've got to do now is build off of this. I told the seniors in there that I feel people came to watch this year," Burgess added.

"They came out to watch South Putnam basketball and it's directly related to those five. They're fun to watch. They play hard, they play the game the way it's supposed to be played and I'm very, very proud of them," Burgess said.

IHSAA Class 2A Sectional No. 44