Local community hoping to make a difference in tornado relief 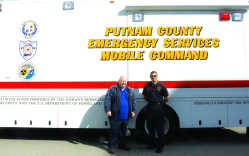 The Greencastle Fire Department, as part of Task Force Seven, will be helping out with the tornado releif efforts in Sellersburg. Tom Swenson (left) and firefighter Paul Hinton traveled to Sellersburg on Monday evening to help support the command support structure.

As many victims begin picking up the pieces destroyed in a set of severe storms and tornadoes that raged through the Midwest and South, some are looking to help those in need.

With as many as 95 confirmed tornadoes nationwide, Reelsville residents Keith and Tracey Goad are looking to help their fellow man by collecting donations to help those in need. The Greencastle Fire Department is also offering its assistance as a part of Task Force Seven.

The Goads started their Sunday morning watching the news when they decided instead of feeling sad for the storms victims they needed to help.

"My husband and I were watching the news," explained Tracey. "We looked at each other while we were drinking our coffee and I think we were both thinking the same thing at the same time, we need to help these people."

The couple enlisted the help of its church, Big Walnut Baptist Church, during their regular Sunday morning service, which raised more than $100.

"I think it's kind of a big deal that we help these people," explained Tracey. "Instead of sitting around feeling sorry for these people, we need to do something to help them."

The couple is getting its mission out by emailing the area churches for their support and donations.

They will be collecting donations on Saturday, March 10 at Big Walnut Baptist Church from 8:30-10:30 a.m. They are planning to leave around 11 a.m. to take donated items to Vienna Baptist Church in Scottsburg.

As word has begun to spread, the couple has secured a semi-truck in hopes of filling it to capacity.

"I'm just in the beginning stages of figuring out what is actually happening," said Tracey. "I have a feeling we are going to take quite a bit of stuff down there."

"We are looking for non-perishable food items," said Tracey. "We would like things that people can eat without having electricity or a can opener."

However, due to an increase in canned food donations, the Vienna Baptist Church is reaching out for donations of can openers.

"There has been food that's been donated and they don't have any way to get to it," said Tracey. "They do not want furniture or clothing at this time, but they'll take almost anything else."

The couple is also offering to deliver secure cash donations as well as asking for all checks to be made out to the American Red Cross.

The Indiana Emergency Operations Center also called upon the Greencastle Fire Department for its help as a part of Task Force Seven.

Fire Chief Bill Newgent along with the fire department administrative assistant Brook Taylor traveled to Sellersburg early Monday morning. Newgent will be acting as incident commander for a period of three days.

"They will be supporting the command structure," said Assistant Fire Chief Jeff Mace. "The state activated them to relieve the state team."

It is unclear at this point whether the team will be activated a second time following its three-day stint in Sellersburg.

The American Red Cross has also launched a large relief operation across 11 states to help those affected by the storms.

"Our hearts go out to everyone who has been affected by these severe storms," said Carol Stevens, Wabash Valley Executive Director. "Our top priorities right now are making sure people have a safe place to stay, a warm meal and a shoulder to lean on as they begin to clean up their neighborhoods. The Red Cross is also working closely with our government and community partners to make sure everyone gets what they need."

If someone would like to help the people affected by the disasters like tornadoes and floods, they can make a donation to support the American Red Cross Disaster Relief by visiting www.redcross.org, calling 1-800-RED-CROSS or texting the world REDCROSS to 90999 to make a $10 donation. Contributions may also be sent to P.O. Box 37243, Washington, DC 20013.