Local man has donated 22 gallons of blood since 1977 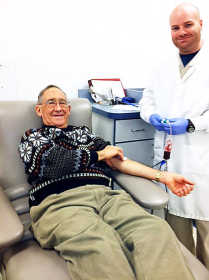 Don Flint is a man who takes his routine very seriously. Since April 1977 he made it his goal to donate blood every 56 days. It is his dedication that has resulted in him donating 22 gallons total or 175 pints, and has no plans of stopping.

Flint, a man who has lived in Putnam County all his life, began donating after his work at the time held a blood drive. Not thinking much of it, he donated for the first time.

"They had a blood drive while I was working at IBM," explained Flint. "I decided what the heck, it might help somebody."

The practice of donating blood caught on, and it became something that Flint enjoyed and needed to do as much as possible. Just one unit of blood helps up to three patients.

"It just got to me," said Flint. "I know from reading it helps out a lot of people. Even one pint helps several people."

As the IBM facility closed here in Greencastle, Flint decided to keep the felt board that stood above his desk during his time there. It was this board where Flint strategically placed the stickers he received each time he donated blood.

"They used to give out stickers when you gave blood," explained Flint. "I tacked the stickers up to the bulletin board, but I've had to put an extension on it. I've got 175 stickers now."

For Flint, the stickers make it easy for him to keep track of just how many times he's donated, a way to visualize his accomplishment.

At the age of 80, it is believed he has donated the most blood in the surrounding area. Although, there are many regulars just like Flint, he is religious on donating any time he is eligible.

As soon as he was back on his feet, he was donating as soon as he could. In total, Flint lost around six months altogether.

As time has gone on, Flint has occasionally run into scheduling problems.

"There are three churches in town which schedule blood drives," said Flint. "It used to be pretty regular, every 56 days they had a drive. But, for some reason the scheduling keeps getting messed up."

A little scheduling conflict has not stopped Flint from his routine. He has made an effort to drive to Avon and even Terre Haute just to give blood on time.

Flint plans on donating until he no longer can. The way he views it, there will always be a need for more blood.

"They used to stop at age 65," said Flint. "I don't think there's a limit at all on it now, as long as you're healthy they'll take your blood."