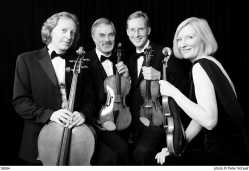 The American String Quartet will visit DePauw University this week, giving a master class at 6 p.m. Wednesday and recital at 7:30 p.m. Thursday. (Photo by PETER SCHAAF)

The DePauw University School of Music welcomes the American String Quartet to campus for a two-day visit this week.

Both events will take place in Thompson Recital Hall of the Judson and Joyce Green Center for the Performing Arts and are free and open to the public.

Internationally recognized as one of the world's foremost quartets, the American String Quartet celebrates its 36th season in 2011--12. Critics and colleagues hold the Quartet in high esteem and many of today's leading artists and composers seek out the Quartet for collaborations.

Formed in 1974 when its original members were students at the Juilliard School, the American String Quartet was launched by winning both the Coleman Competition and the Naumburg Chamber Music Award in the same year.

Founded in 1884, the DePauw University School of Music is the nation's sixth-oldest private institution for post-secondary music instruction and the longest-running in Indiana.