The 2012 Hall of Fame Farm Family award was presented to Gene and Alice Beck of Bainbridge, while the 2012 Friend of the Farmer honor was bestowed upon Rodger Winger of Tri-County Bank. 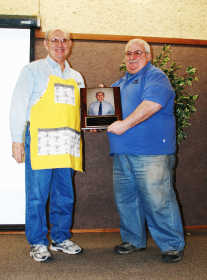 A near-capacity crowd filled the Community Building to feast on a breakfast of sausage and pancakes, listen to guest speaker Larry Deboer of the Purdue University Ag Econ Department and in general, celebrate all that is good and down-to-earth about local agriculture.

Before he had the slightest idea he would even receive the Friend of the Farmer Award, Winger addressed the gathering to announce that the $1-per-person breakfast enabled organizers to donate $1,000 to the Putnam County Fairgrounds Endowment.

"The money came from all of you," Winger said, explaining that the endowment will help fund maintenance and upkeep that should perpetuate the use of the fairgrounds facilities for generations to come.

Looking out at the crowd, Winger also noted that the Ag Day breakfast was moved from a weekday morning to Saturday "with some trepidation."

However, the schedule change was definitely greeted sunny-side up.

"We ran out of pancakes this morning," Winger said, "and that's never happened before, and we nearly ran out of sausage.

"It's also nice to have so many children here," he said, scanning the breakfast crowd. "We've never been able to do that before."

Former longtime Extension Youth Agent Darrel Thomas emceed the awards portion of the program, presenting the Hall of Fame Family Farm honor to the Becks, who run a livestock and corn and soybeans operation with their children, Andy and Kelly.

The Becks obviously take great pride in raising Polled Hereford cattle, but get much the same satisfaction by serving Putnam County, it was pointed out. 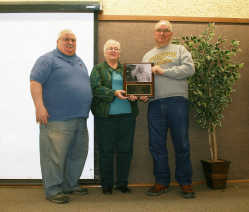 Thomas also noted that Beck has served on both the Putnam County Board of Commissioners and County Council and is a former deputy sheriff. Wife Alice has worked in courthouse offices as well.

Thanking the Ag Day audience and the awards committee, Beck took a moment to laud the Putnam County Fair as well.

"Our fair is one of the greatest fairs in the state," he praised.

Introducing Winger as the 2012 Friend of Farming recipient, Thomas called him a "pancake flipper emeritus" in admiration of his longtime involvement with the breakfast.

Winger came to Putnam County 40 years ago with the local Production Credit Association office. Currently he is vice president of Tri-County Bank.

"I've seen the good, the bad and the ugly of farming," Winger offered, reminding the farm audience that "the conservative decisions we make in good times are what allow us to persevere through bad times."

Winger, who has been involved in the Putnam County Ag Day celebration since it began, also has been a 4-H leader and served two six-year terms on the Extension Council. 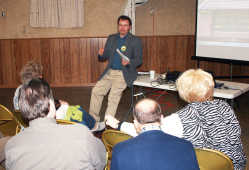 Deboer said farmers can assure themselves that the base rate is definitely going to rise and soil productivity factors are eventually going to be revised.

"That means tax bills on farmland are definitely going to be going up," he said.

"We know what's going to happen to assessed valuation on property," Deboer added. "The only real advice I can offer is to 'plan accordingly.'"

The annual Ag Day program continued with the Mini-Farm Fest in the adjacent portion of the Community Building.