She was born in Kirkwood, Mo., and her career began as an instructor of economics.

She married Professor Ralph Gray in 1955, in Kirkwood, when both were graduate students at Syracuse, N.Y.

In 1965, they moved to Greencastle, when they both joined the economics faculty at DePauw University. 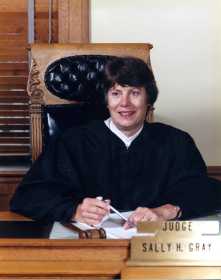 Surviving, in addition to her husband of 57 years, are the children, Carol Susan Gray, who lives with her husband in Hawaii, and David Gordon Gray, of Naples, Fla.; two grandchildren, Amber Rose and Gaia Faith, and a great grandchild, Diego. Her twin sister, Susan Barnett, lives in Las Vegas, Nev.

In 1975, Sally enrolled in the Indiana University School of Law, completed her studies there and was admitted to the bar in 1979.

She was instrumental in opening the first Legal Services office in Terre Haute.

In 1981 she was elected and sworn in as the first female judge of the Putnam County Superior Court. She served the county and state as judge for 24 years.

Judge Gray was active in many programs during her tenure with the judiciary. She was instrumental in founding the Putnam County Drug and Alcohol program. She was a co-founder of the PIE Coalition and founding member of the Governor's Commission for a Drug Free Indiana and served as the Judicial Representative on the commission for years.

Judge Gray taught at the National Judicial College, and served as a member of the National Drug Control Strategy Panel.

Her commitment to the community and to the people she served knew no boundaries. Sally was always attentive to the issues and needs of those who appeared before her, and she made every effort to see that justice was served.

In 2004, still serving as a senior judge appointed by the State Supreme Court, she became very interested with a group of citizens intent on bringing a museum to Putnam County, a place to preserve our heritage. Realizing that one of her gifts could be fundraising, she retired as judge to devote her full energy to bringing the dream of a museum to reality. Thanks to her contributions in attracting new members, in working uncounted hours, and in providing long-term financial assistance through funds created via the Putnam County Community Foundation, the museum has flourished. She served as president of the museum board, and was given emerita status in 2010

Her recognitions and awards are many. She was named Sagamore of the Wabash by the governor, given the Bessie Rector Award from Putnam County Family Services, the Mental Health Advocate Award from Cummins Mental Health, and commendations from the Phoenix Community Corrections Advisory Board.

In 2005 she was recognized as Putnam County Citizen of the Year by the Greater Greencastle Chamber of Commerce, and in 2010, the Putnam County Community Foundation named her winner of the Spirit of Philanthropy, the highest award given by the Foundation, recognizing her many gifts given for the betterment of the community she loved.

She loved to be with people, enjoyed riding horses, playing bridge, gardening, entertaining friends, and she made friends wherever she went.

Sally Gray has been a leader for the good of the county in every endeavor, by seeing a need and providing leadership, cheerfully volunteering her time and resources. She lived life to the fullest, and will be missed by everyone who was blessed to know her.

A memorial service will be conducted at 1 p.m. Saturday, March 24 in Meharry Hall at East College on the DePauw University campus.