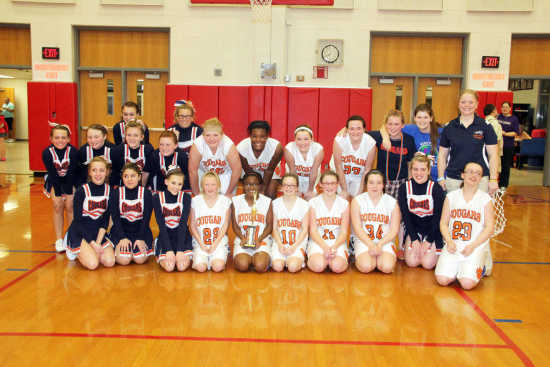 On a night when basketball fans set their sights on the NCAA men's tournament from some thrilling action, a nice crowd at South Putnam was treated to some exciting hoops action in the final of the seventh grade girls' Putnam County tournament. North Putnam rallied back to win 21-20 in overtime over Greencastle.

North Putnam head coach Ashley Schopp said the team had a good season, but she didn't expect to come away with the county title.

After finding themselves down 13-8 at the half, North Putnam attacked the Tiger Cubs to open the second half and quickly erased the GMS lead to trail by just one point, 17-16, going into the fourth quarter.

North Putnam took the lead with 3:20 remaining when Emilee Henninger hit a bucket to make it 18-17. The score with hold at that margin until Greencastle's Kate Anderson hit the back end of a two free throws to knot the game at 18-all.

When the buzzer sounded to end regulation, the two squads remained tied, so three minutes were put on the clock to decide the county championship.

North Putnam was the first to strike as Henninger hit a free throw to make it 19-18 in favor of the Cougars with just over two minutes remaining.

With 45 seconds remaining, Greencastle's Emma Taylor stole the ball and drove to the hoop and scored on a layup, moving GMS out front 20-19. But the Tiger Cubs had little time to take a breath as North Putnam was second to the line 10 seconds later.

The Cougars' Lyndi Parent had missed two previous free throws in the fourth quarter, but when she strode to the line with 35 second left in overtime, it was a different story. Parent buried both free tosses to give the Cougars a 21-20 edge and ultimately the championship win when Greencastle failed to find the hoop.

Following the game, Schopp acknowledged a tough defensive effort her team displayed on the court.

"I saw good heart and defense. Our pressure defense just frazzled them and it was good tonight," she said.

She said at the half she told her team that nothing's over until it's over and praised the effort her team gave in the second half, labeling it as "great".

For the Tiger Cubs, Anderson led the way with 10 points, while Grace Paul chipped in six. Taylor and Gracie Foster added two points each.