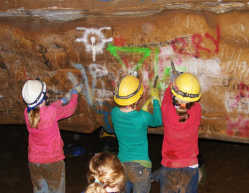 Girl Scouts from Troops 10149 and 10007 in Bainbridge and Roachdale use wire brushes and mud rags to eradicate graffiti from the wall of Buckner's Cave in the Richard Blenz Nature Conservancy near Bloomington.

Not exactly the place you'd expect to find a group of teenage girls and their mothers, is it?

Yet a hearty group of Girl Scouts -- mainly from troops in the Bainbridge and Roachdale area, along with a few brave Marion County Brownies -- ventured into the 3.5-mile-long Buckner's Cave in the Richard Blenz Nature Conservancy near Bloomington and worked tirelessly for nearly seven hours on March 10.

Their mission: To eradicate years worth of graffiti from the walls of the cave and help restore it to its natural beauty.

The cave was "absolutely filled with graffiti and trash from 50 years of college partying," Girl Scout Leader Holly M. Cook of Troops 10149 and 10007 told the Banner Graphic.

The girls used wire brushes to scrub out the graffiti and employed rags covered with mud "paint" to further enhance the natural look of the cave.

Just getting into the main passages of the cave required some nifty maneuvering by the girls. Small holes and damp, narrow passages meant a 100-foot Army crawl, a 500-foot hand-and-knee crawl and 20-foot climbs.

"It was not an easy cave," assured Cook. "It is an active cave," she added, noting the presence of bats, bugs and water.

"One of the girls saw an eyeless, white 'blind crayfish' that had evolved over time in the cave. She thought it was a spider." 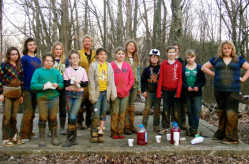 Another girl had a bat land on her arm, resulting in one of the few squeamishly unnerving moments. The girls had been instructed to remain as quiet as possible during the undertaking because the bats were still in hibernation.

Cook explained that the group's main task was to get in and remove as much of the graffiti as possible and worry about fine-tuning things later.

What graffiti the wire brushes couldn't eradicate, the girls smeared over with mud designed to loosen the paint beneath it for removal at a later date.

"It was educational, a way to help with a project and restore the cave as close as possible to its natural state," Cook noted. "We talked about the Nature Conservancy motto before we went in: 'Take nothing but pictures, leave nothing but footprints, kill nothing but time.'"

Buckner's Cave has been heavily vandalized in recent history and is "a prime example of everything you should not do in a cave," Cook said.

Vandalism has ranged from spray paint to trash and carbide left behind by other careless cavers to urine and feces being deposited in the cave.

The cave's entrance is an oval-shaped sinkhole approximately 15 feet deep and 20 feet wide which leads downward in a gentle incline for about 50 feet before opening up into a large room.

Access to the rest of the cave is found through a small hole that brings explorers to an approximately 600-foot army crawl to the next large cavern. Throughout the cave many paths and routes exist and most tunnels and caverns have a few offshoots.

The cave is generally viewed as safe in rainy weather. The upper levels in Buckner's are dry and dusty while the lower level stream usually ranges from a few inches to a few feet in depth.

In 2005, owner Richard Blenz, donated the property to the National Speleological Society (NSS) and it is now the Richard Blenz Nature Preserve (RBNC). It is still managed by the RBNC.

The Nature Preserve has been actively removing graffiti and restoring the cave to as close to its natural state as possible. To learn more or to offer assistance, go to www.bucknercave.org.