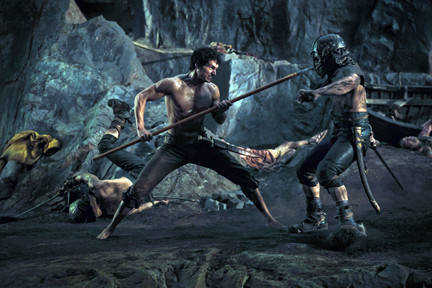 Proving once again that Hollywood values style over substance, "Immortals" is another flick that inundates us with overpowering digital effects and forgoes trying to tell a cohesive story. The second film in as many years to have Greek Gods at the center of it learned little from its predecessor "Clash of the Titans."

It would be almost forgivable if the sequences between action scenes were interesting, but unfortunately they are dull and lifeless and do little to enhance the story. If the movie could be re-edited down to around 40 minutes, it would be a killer addition to an action library, but its meandering script leaves you thinking more about doing the dishes than what's going to happen next.

The film centers on Theseus (Henry Cavill) a peasant warrior whose village is attacked and his mother killed by Hyperion (Mickey Rourke) in his quest for the Epirus Bow. With the mythical weapon Hyperion plans to unleash the Titans from their prison in Mount Tartarus.

Zeus (Luke Evans) instructs the other gods, which include "Twilight "alum Kellan Lutz as Poseidon, not to interfere with man's affairs. Each disobeys and helps Theseus along his journey.

Also helping Theseus is the virgin oracle Phaedra (Freida Pinto), whose vision shows Theseus hoisting the Epirus Bow. As he is burying his mother, Theseus discovers the bow in a rock and after dispatching Hyperion's top henchman Beast (Robert Maillet) he, along with a small group that includes Phaedra and thief Stavros, makes their way to Mount Tartarus.

Along the way Theseus loses the bow and has to convince King Cassander (Stephen McHattie) to seal the gates before Hyperion, who is now in possession of the bow, attacks. And attack he does.

The battle at Mount Tatarus provides some of the best moments of the film. The quick-paced action sequences look great and you almost forget the agony director Tarsem Singh has put you there to get you to his point.

The final battle when the Gods descend is equally slick. Plus you have Hyperion and Theseus duking it out like a couple street fighters inside the temple walls. All in all, the ending is satisfying, but can't make up for the lack of thrills throughout.

In addition to a very slow moving script, my biggest issue with "Immortals" was how dark it was. I love it when movies are shot dark or even in shadows, but when you can't tell who is who or what action is taking place, the filmmaker has officially gone too far.

While Cavill is getting a lot of attention due to him donning Superman's cape for next year's "Man of Steel," the real star of "Immortals" is Rourke. He's a ruthless king who will stop at nothing to get the Eprius Bow and unleash the Titans. I love when an actor isn't afraid to get down and dirty and that seems to be when Rourke is at his best.

Cavill is good at the lead and I think he'll do some great things in the role as Superman. He didn't really knock my socks off, but you can see the talent that lurks just beneath the surface.

From the ending of the film, a sequel is obviously on its way, but a change in director or screenwriter is needed. For a story that could have been a real treasure, you feel like you've uncovered Fool's Gold instead of the real deal.

The DVD offers little in the way of special goodies. You get the featurette "It's No Myth" and a few deleted scenes and that's it. They say less is more, but in this case less might as well been nothing.

Final Cut: "Immortals" excels during its action sequences, but falls flat when it comes to delivering a story. The film is a middle of the road fantasy flick that didn't learn from the mistakes of "Clash of the Titans" and repeated the same formula that failed to thrill. Hopefully its sequel will up the ante.

MPAA Rating: R for sequences of strong bloody violence, and a scene of sexuality