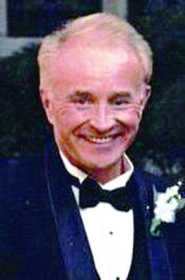 He was born in Indianapolis to Wenfred Fuson and Lucylle Mary (Wachsman) Fuson. He was married in Greencastle on June 14, 1959 to Shirley "Sue" (Smythe) Fuson, who survives.

Bob received his bachelor and master degrees in science from DePauw University in Greencastle. There he enjoyed being a Sigma Chi. He then graduated from Indiana University School of Medicine. He finished his residency in thoracic-cardiac surgery, as well as a seven-year research fellowship at Duke University, Durham, N.C.

Doc and his family moved on to Summerville, N.J., where he taught anatomy at Rutgers University, New Brunswick, N.J., and was director of research & development at Ethicon, a division of Johnson & Johnson.

He was the senior vice president for Zimmer, Inc. of Warsaw, Ind., from 1975-1996, as well as working in Medical Products Research.

He was very involved in the community as a board member for the Kosciusko Community Foundation and Warsaw Biblical Gardens. He loved attending/supporting MasterWorks Festival, Winona Lake, and summers in The Village of Winona Lake. He attended Warsaw Community Church, and loved antique automobiles, especially fire trucks.

He was preceded in death by his parents, and one son, Brian Lee Fuson.

A Celebration of Life Memorial will be conducted on Friday, April 27, 2012 at 11 a.m. at Warsaw Community Church, 2300 Ranch Road, Warsaw, and officiated by Pastor Denny Wilson.

The family will have a private ceremony later this summer to further honor his wishes, at the gravesides of both families in Greencastle.

Online condolences may be sent through the funeral home's website at www.redpathfruthfuneralhome.com.