Tribute to Jack Boswell to play on Shotgun Red show 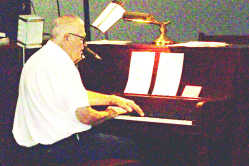 Known for his cross-handed piano playing, Jack Boswell played country and gospel across Indiana for parts of six decades.

NASHVILLE, Tenn. -- A Putnam County country gospel icon passed away just before he had the chance to take his talents to Nashville, but his music will still find its way onto the small screen.

Jack Boswell and his Country Gospel Band was scheduled to go to Nashville on Jan. 9 for a taping of the Shotgun Red Variety Show. Unfortunately, the Reelsville resident unexpectedly passed away on Dec. 30 at age 76.

That could have been the end of the story for Boswell's music if not for the efforts of Steve Hall, the show's producer.

Hall has paid tribute to Jack and his music ministry on a show to be aired on RFD-TV at 7 p.m. Monday, March 26.

The band was initially chosen as one of 78 acts among 2,500 applicants.

Boswell was largely recognized for his cross-handed piano playing. He played throughout the '60s, '70s and '80s in many of the Indianapolis area's finest nightclubs with his band The Country Starliters.

During this time, he had the opportunity to play with 18 artists who have been inducted into the Country Music Hall of Fame.

After retiring in 1983, Boswell devoted his musical talents to the creation of a faith-based music ministry and went on to perform in hundreds of churches throughout Indiana.