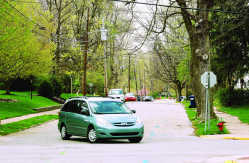 The current status of Anderson Street, here looking west from Bloomington Street, will never be the same after the first wave of construction work begins Monday. The intersection with Bloomington Street will see all the overhead utility lines disappear and will feature accent paving to help create a dynamic new entrance to the DePauw University campus.
Order this photo

As they like to say on the beer commercials these days: Here we go ...

More than a full year after being awarded one of the first two Stellar Grants by the state of Indiana, the City of Greencastle is about to see concrete proof of the more than $19 million infusion of cash into the community.

Until now, with the exception of the city-funded creation of the Wi-Fi bubble in the downtown area, progress has essentially been all behind the scenes.

On Monday, that will change as things begin to get serious.

"This is what we've been waiting for. Life has become fast and furious," Mayor Sue Murray said this week after the Greencastle Board of Works approved seven contracts relative to Stellar project work.

Six of those contracts directly affect the project to upgrade Anderson Street from Bloomington to Locust streets, creating what will become the gateway to DePauw University.

Mayor Murray has repeatedly noted that without DePauw's involvement, there would be no Stellar Grant for Greencastle.

"DePauw paying for Anderson Street gives us match money for our other six projects," the mayor stressed.

The university has put up the 20 percent match for the $6 million INDOT portion of the overall $19,031,287 Stellar package. That's $1.2 million the city did not have in its $10 million annual budget, and thanks to DePauw, the funds have been leveraged against state and federal grant funds.

The Anderson Street project is due to restore two-way traffic to the section of Anderson between Bloomington and Locust.

For starters, the Board of Works awarded three separate contracts and a notice to proceed to Bret Hurley Construction, Greencastle, for water main relocation, wastewater work and (as an alternate) tree removal along Anderson Street. Hurley's work is set to begin Monday and must be done by April 28 in order for street construction to begin on time.

The city will share some of those utility costs with DePauw since the water and wastewater work was already in its five-year plan.

The project will relocate the water main behind the new sidewalks. That contract is for $69,053, while the wastewater portion will be $23,268. The tree-removal contract is for $5,000 for 10 trees.

"Those will be replaced by 50 other trees when the project is over, so there's a net gain of 40 trees," the mayor said.

Again, since the city is the grant recipient, it will pay those costs up front with DePauw reimbursing the funds.

"We want to emphasize that it's construction season," the mayor said in forewarning residents. "This is going to keep us all with lots to watch this summer.

"Anderson Street folks will have alternate parking and we're not cutting anybody off from their homes.

"We will be trying to create as minimal amount of hassle as we can but we all know construction is messy," she added.

"We all need to remember that this is something we really celebrated last year, and we will be celebrating again," she noted.

The magnitude of the entire project -- which will also include the streetscapes on Indiana, Vine, Locust, Spring and Washington streets, along with College Avenue -- remains mind-boggling, even to city officials.

"Thirty years of work in three years," Board of Works member Trudy Selvia called it.

The unprecedented nature of the project caused City Attorney Laurie Hardwick to label it "unheard of ... never before done ..."

Hardwick also pointed out that the firm Crawford, Murphy and Tilly, which did the heralded Georgia Street design work for the City of Indianapolis Super Bowl project, has been chosen to do the Greencastle streetscapes.

In other business, the Board of Works:

-- Approved issuing a $12,970.72 check to DePauw as a refund for a misreading that occurred during summer 2011 on the university's sewage bill. The refund was initially being returned as a monthly credit to DePauw but that became a cumbersome bookkeeping issue for both the city and university. Issuing the refund check will clean that up, city officials said.

-- Agreed to meet in special session at 4:30 p.m. Monday, April 2 to tie up loose ends on Stellar project-related items such as the contract for grant administrator and the contract for design work on the proposed downtown parking garage.