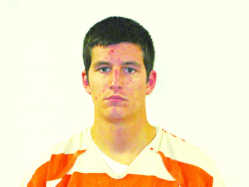 PUTNAMVILLLE -- A 24-year-old Vigo County man, employed as a correctional officer at the Putnamville Correctional Facility (PCF), has been arrested for allegedly trafficking in a controlled substance at the prison.

Officer Shawn Rogers, Terre Haute, was arrested at the facility on Monday as the result of an investigation conducted by the PCF Internal Affairs staff.

After allegedly attempting to bring a controlled substance into the facility, Rogers was taken into custody by Correctional Police Officer David Wire.

Authorities said Rogers was concealing the narcotic medication suboxone in his groin area.

Suboxone, reportedly used to treat opioid addiction, is described as an orange-colored, lime-flavored hexagonal tablet. Available only by prescription, suboxone is supposed to be taken only under a doctor's care as prescribed.

Rogers was subsequently transported to the Putnam County Jail where he was held on charges of trafficking in a controlled substance, a Class C felony.

Rogers, who had been employed with the Putnamville facility since Dec. 10, 2010, has been terminated, PCF officials said.

"We hold our staff to high professional standards, and will not tolerate criminal behavior at the workplace," PCF Superintendent Stanley Knight stressed.