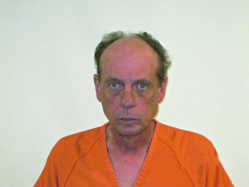 REELSVILLE -- Two Center Point teens got more than they bargained for on a Sunday afternoon fishing excursion. The smallmouth may not have been biting, but the sound of gunfire, a vehicle chase and the arrest of a 54-year-old Brazil man provided for a full afternoon.

John Thomas Clark is in the Putnam County Jail for allegedly firing a rifle at the 13- and 15-year-old boys as they fished along Croy's Creek.

In statements to the Putnam County Sheriff's Department, both boys say they observed a man in camouflage clothing load a rifle and begin firing in their direction. One of the boys said the subject looked directly at them before firing.

Both boys advised the bullets hit so close that the two of them were splashed with water from the creek.

The teens advised they hid in the grass when the firing began, at which time the 15-year-old called his cousin Dustin Langley, who is also the other victim's father.

The boys said they got up and ran from the scene when Clark stopped firing to reload his clip.

Langley notified 911 dispatch of the incident as well as confronting Clark about it.

Langley, the 15-year-old and two other males approached Clark on the south side of the creek. Langley said he took a gun with him to talk to Clark.

During this confrontation, Langley said Clark admitted to knowing the two boys were present prior to firing the shots. After being told to do so, Clark left the scene and began riding northbound on County Road 775 West.

Langley and his party then pursued Clark as he made his way north and west.

When the Sheriff's Department arrived, Lt. Don Pettit made contact with Langley and the three others in his vehicle. Deputy Adam Hull located Clark on County Road 675 West, just south of County Road 875 South.

Pettit investigated the scene and found 26 spent shell casings on the south side of the creek.

After being arrested and taken to the jail, Clark told police he had not seen the boys, but acknowledged he "fired 21 rounds into the mud bank at various ranges."

He said after he was done firing, he began picking up trash and burning it until he heard men approaching. He said one of the men had a handgun and was waving it around.

Upon being told to leave, Clark advised he did so, but was later met on the road by people who began following him.

Clark was preliminarily charged with criminal recklessness with a deadly weapon, possession of a handgun without a permit and shooting into a waterway.

As of Tuesday evening, the Putnam County Prosecutor's Office had not formally filed charges.