Clovers make opening day a cause for celebration

The Clovers jumped in front early and never allowed the Mounties into the game as the hosts took a 12-2 win in six innings. 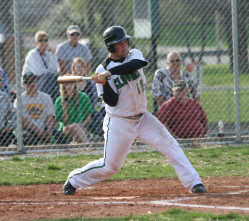 Senior Brian Dale, shown here in a 2011 game, belted a two-run home run to kickstart Cloverdale's 2012 season with a 12-2 win over Southmont. (Photo by CAINE GARDNER)
Order this photo

Senior Brian Dale started things off right for the Clovers with a two-run shot to left centerfield in the bottom of the first to give the hosts a 2-0 lead. A sac fly from William Whitinger made the lead 3-0 later in the inning.

Cloverdale added three more in the bottom of the second on Dale and Austin Mannan singles, as well as a steal of home by Ethan Atwood.

Jordan Brinkman also took home in the third, while Mannan scored an inning later on a passed ball for an 8-2 advantage after Southmont scored two in the top half of the fourth inning.

The Clovers threatened to end the game in the fifth but only scored twice after bases were loaded.

The home side finished the job in the sixth after Atwood's groundout pushed the 11th run across and a passed ball allowed Brinkman to come in for the final run.

Cloverdale head coach Brian Archer was happy with the performance of the squad, particularly on the defensive side of the field.

"I thought both of our pitchers, especially (Justin) Wilson did a really good job of throwing strikes, giving our defense a chance to make plays," Archer said.

"The defense played well. There was an inning where you could see the big inning from Southmont coming, but our defense stood strong and our pitching came through.

"On the offensive side, we did a good job of putting the ball in play. We hit the ball hard. Dale had the home run and several guys had hard line drives and shots throw the infield. That's what we need," Archer added.

"There are still some things we need to work on, on both sides of the ball, but all in all, it was a pretty good night for us."

His team having lost several early games last year, including to Southmont, Archer said that getting the win in the fashion the Clovers did Tuesday night was a positive experience.

"We've really stressed pitching and defense over the last two weeks. We have to play good defense to win games, along with solid pitching," Archer said.

"We had both of those tonight, which gave us a chance to win. For us to be competitive, those are the things we've got to do. I'm glad we saw it come through tonight and know that's what they have to do to do it."

Next Game: Cloverdale travels to Lanesville for a doubleheader Saturday.