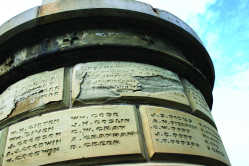 Heritage Preservation Society is its name; heritage preservation is its game.

And the Putnam County organization is about to embark on one of its most important missions -- restoring and preserving the prestigious Civil War Soldiers Monument in Greencastle's Forest Hill Cemetery.

The 29-foot-tall monument stands as a memorial to Putnam County soldiers who fought in the epic War Between the States. But pieces of the limestone structure are crumbling and cracks are appearing in the monument as it nears its 142nd anniversary.

During its annual meeting earlier this week, the Heritage Preservation Society (HPS) briefly addressed the possibility of spearheading an effort to ensure the future of such a relic of our past.

The monument -- which bears names of 321 Putnam County soldiers who died in the Civil War -- was dedicated on July 2, 1870 before an amazing number of visitors.

"There were 8,000 people here for the dedication," Putnam County Heritage Preservation Society President Phil Gick said earlier this week. "There probably were only half that many (people) in the community at the time."

Records indicate that in 1870 Greencastle was home to fewer than 3,300 residents. But many dignitaries helped swell the throng on hand to dedicate the monument, including Indiana Gov. Conrad Baker and Lew Wallace, Indiana's own Civil War general from Crawfordsville. 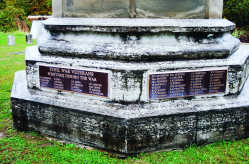 While names were etched into the limestone statue where several are now crumbling away, the bronze plaques (below) at the base of monument were a recent addition when it was discovered not all Civil War veterans' names had been included.
Order this photo

The monument was designed to be on a "crowning eminence" in the local cemetery -- which had opened south of Greencastle's city limits at the time -- just five years earlier.

HPS President Gick said the organization will "try to be part of the solution" by raising awareness that the monument "needs attention."

Gick suggested that HPS hopes to partner with other organizations, which most certainly would include the Forest Hill Cemetery Board, to help raise funds for a restoration.

During its January meeting the Cemetery Board discussed the cost of having the Civil War monument cleaned and obtaining estimates on having repairs done before it is allowed to further deteriorate.

The Civil War Round Table of West Central Indiana has called the monument "one of the true hidden treasures around here."

The Forest Hill monument was just the third such memorial to Civil War soldiers to be erected in Indiana after the close of the Civil War. To this day, it remains one of the more unique, experts agree.

The local monument is considered the earliest example of a military figure appearing on a Civil War memorial in Indiana.

"There is no other figure like him in the state," the website Sculptural Civil War Monuments in Indiana states of "the unusually seated cavalry soldier." 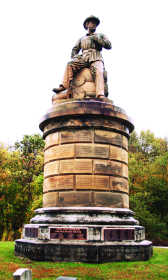 The statue of the soldier atop the monument is considered of "heroic size" and is believed to be a "faithful portrayal of a Civil War volunteer," according to documents from the 1870 dedication ceremony.

Originally the soldier held a rifle, but it was stolen as a fraternity prank. After it was eventually recovered, the rifle was never reinstalled for fear of repeated thefts and/or vandalism.

When a nearby home used as the cemetery office was consumed by fire in 1979, the rifle was lost to all eternity.

Old postcards featuring the monument can be found showing the soldier with rifle in hand.