SPENCER -- The YMCA/Friends of McCormick's Creek 5K Run/Walk Saturday morning attracted 166 racers. The race began near the pool at McCormick's Creek State Park, traveled 3.1 miles on scenic park roads and ended back at the pool.

The race was a fundraising event for the Owen County Family YMCA Strong Kids Campaign and the Friends of McCormick's Creek, as well as part of the Magnificent 7 Race Series.

For 17-year-old Peter Wegener of Springville, the race was over in 17 minutes and 31 seconds. Wegener was the fastest runner on Saturday with a mile pace of 5:38, earning him his third first place overall win in a row at YMCA /MCSP races. 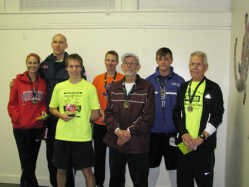 Justin Graham of Cloverdale followed Wegener across the finish line with a time of 17:57. Joe Liechty of Greencastle also participated in the event.

Thirty-year-old Lindsay Bruick was the first female to cross the finish line with a time of 20:22. Mandy Knust was second among female runners with a time of 20:46. Coincidently, Bruick and Knust also placed first and second in the female run competition in the fall trail race.