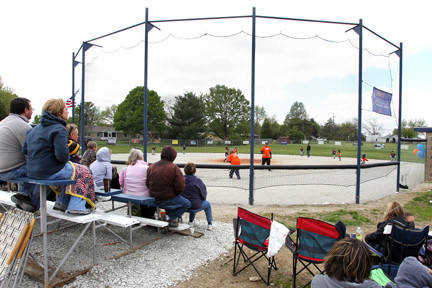 ROACHDALE -- The North Putnam Youth Baseball League (NPYBL) celebrated another great season opener at the newly improved Heritage Environmental Field in Roachdale on Saturday, April 21. Players, fans, and local businesses came out to celebrate the season cheering loud and proud for the Cougars.

At the microphone was league President, Tim Davis thanking sponsors, volunteers and board member Jason Monnett announcing players onto the field for the first time this season. Throwing out the first pitch was long time Roachdale resident Bill Berry, also representing Heritage Environmental Services. Catching the first pitch of the season was Mr. Berry's grandson, Jaelyn Berry representing the 10U North Putnam Cougars.

During the ceremony the North Putnam Middle School and High School choir director, Kelly Thomas and students sang the "National Anthem." Also leading the crowd for the traditional singing of "Take Me Out To The Ballgame" were North Putnam teachers, choir students and the 12U North Putnam baseball players.

In addition, Roachdale police and fire vehicles and personnel were there to shake hands and take photographs with familes. Organizors would like to thank the Pizza Den family who volunteered their time to grill brats and burgers throughout the day for the fans.

Heritage Environmental Services is this season's NPYBL "Sponsor of the Year" as they were generous supporters in the revitalizing of the Roachdale West diamond.

In 2010, NPBYL board members realized that one little league baseball diamond in Bainbridge in Clarence E. Steward Park was not efficient to handle all the games and practices needed for the program.

In 2011, vice president Greg Lyons led the charge to not only raise money for the RBI (Roachdale Baseball Improvement) project, but also revitalize the Roachdale Elementary School West baseball diamond.

With the support of community businesses and volunteer support, the NPYBL are proud to open this season with a new and improved, safe little league baseball facility in Roachdale.

The league also extended thanks to Steele Dynamics for donating the fence around the diamond and Charlie Riggle of Roachdale Hardware for always being there when they need him.

To find out how they can get involved with this project, people can contact a NPYBL board member or visit them on Facebook.

The day was complete with scrimmage games from 5U through the 12U divisions.

The NPYBL would like to thank all the volunteers, sponsors, coaches, players, and families who make a season possible. Good luck to all the North Putnam Youth Baseball League players this year.!