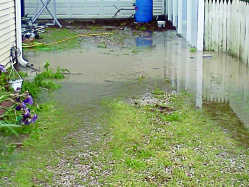 A blocked storm drain on Roachdale's north side caused flooding around the Miethe residence on East Railroad Street Tuesday afternoon. The town, a local fertilizer company and the Indiana Department of Environmental management are trying to sort out who is responsible for the damages.

"It's a nightmare," Breanna Miethe said, standing in a puddle covering her driveway. "We're in trouble because no one will help us."

When the Indiana Department of Environmental Management asked Crop Production Services to block the storm sewer from draining off their property, CPS willingly complied, knowing that it meant they would have to pump all the water that drains on their property into containment tanks.

When a thunderstorm rolled in Tuesday morning, the pumps didn't work fast enough to keep Railroad St. from flooding.

Water backed up out of the Roachdale town storm drain on the south side of the street, flooding the garage and basement crawl space of Michael and Breanna Miethe. The pumps simply could not handle that volume of water.

The radar estimate from the National Weather Service was a little more than an inch of rain. Reports on scene were 1.3 inches.

The home is at the lowest point of the road, meaning water always drains to the area. There has been some standing water on the Miethe property before, but never with this little rain, and never this bad.

Breanna said at its peak, water was bubbling up and shooting out of the town drain.

Their yard was covered with standing water, and it had no place to go. The same water IDEM asked CPS to keep contained was flooding their yard, garage and crawlspace.

"They're worried about contaminated water going into the creek, but for the people in these houses it's OK," Michael Miethe said. "Usually if we have a rain like we had today, I wouldn't have to worry about it."

Preliminary tests CPS has conducted have revealed that the nitrogen concentration in the water, which is what IDEM hoped to control, is between 1 and 2 parts per million.

IDEM said this is the same as the goal for reintroduction into the affected stream.

Soon a crowd gathered on scene, with no one taking action.

"Nobody is going to help us because no one wants to accept responsibility," said Jerry Miethe, Michael's father who came to his son's home hoping to help. "I just don't think anything is going to get done until IDEM forces it."

The town officials and CPS could not agree which side was responsible for pumping the water off the street, so no action was immediately taken.

If CPS had pumped the water fast enough to keep up with the need that arose from the blocked storm drain, the town reasoned, there would not be a flood.

But the water was on town property and CPS believed it was handling all of the responsibilities that had been dictated from IDEM.

CPS continued to pump water out of the drain on the north side of the street, which helped lower the water level.

The flow normally goes from the driveway to CPS. With the basin blocked off and flooded, that flow reversed.

"I don't know if it's contaminated, and it's coming up our driveway." Breanna said. "I've got kids."

When the Banner Graphic arrived, the water level was lower than its peak and the town employees and CPS workers were gone, giving no promise of returning.

CPS allowed Michael to borrow a portable submersible pump for his basement, but with the drain overflowing, there was no place for the water to go.

Michael again called IDEM. Soon after he got off the phone, town officials arrived and began pumping water from flooded town drain into a different storm sewer down the street.

When IDEM initially asked CPS to block the storm drain to keep the contaminated water from polluting a creek and lake, the parties involved believed they would be able to handle a storm situation.

IDEM and CPS thought the town would help with pumping.

Jack Jones, the council president who has been responsible for coordinating the situation for the town, says he made no such agreement.

"I don't think it's our responsibility when the problem lies with them," Jones said. "(The town council) decided right off the bat that we weren't going to pump any water. They (CPS) were gonna be responsible for it."

Council member Zach Bowers said there was confusion with every aspect of the situation.

"I think what it boils down to is, whose responsibility is it?" Bowers said. "I don't think there are enough people who know enough about it to make that decision."

The water the town eventually pumped into the storm drain down the street will flow directly into a larger body of water without being processed.

CPS has been storing the water in containers on site before tests can reveal the best method for disposal.

"(CPS has) done everything we can to collect every drop of water," said Patrick Nellenbach, CPS manager of operations compliance. "We've taken great strides and it's taken a considerable amount of time, effort and resources during a very busy time for us."

Without an accurate map for the drainage tiles under the property, Nellenbach said, predicting the behavior of water during a storm is nearly impossible, as is assigning responsibility.

"We had a plan from our perspective as far as what to contain or how to contain it," he said. "It's hard to ascertain how the pipes will behave."

David Cage, the on-scene coordinator for IDEM, said there was a plan for handling a storm, but nothing as extreme as what occurred on Monday and Tuesday.

"I didn't foresee this happening," Cage said. "Obviously we couldn't expect anything of that magnitude."

When there is a situation like the one on Tuesday, there is no time to worry about responsibility.

"The town and CPS just need to work together," Cage said. "It's a huge maze when you get down there and try to determine who is responsible for what."

Cage said working with the town has been "trying," while CPS has been actively working to remedy the situation.

"At this point you can safely say that a little bit of the contaminant is from CPS and they don't deny that," he said. "Everybody just needs to be an open book and move forward."