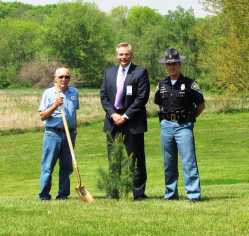 "We're neighbors and fellow state agencies," PCF Supt. Stan Knight said. "It's important that we use our resources for the mutual aid and benefit of one another."

Knight, along with Post Commander Lt. Dan Jones and ISP post groundskeeper Ron Cornelison coordinated their efforts to beautify the grounds of Indiana State Police Post 53 by planting trees that had been nurtured and tended by offenders assigned to the facility's Horticulture Program.

Each tree was hand selected by horticulture supervisor Jack Mitchell.

"I chose white pine because they produce a beautiful foliage, get a nice size and grow fast," Mitchell noted.

When Jones was asked where the trees were to be planted, he quickly deferred to the expertise of his groundskeeper.

"Ron's the guy that you have to talk to," Jones said. "He does a great job maintaining the area and he's the one that's going to have to mow around them."

Cornelison then walked with staff, showing them where each tree was to be planted and conversed as holes were dug and filled with dirt, compost and the two-foot pines.

"This is just what we wanted. It looks pretty barren on this side, but in a few years it will look great," he said.

"The trees will be aesthetically pleasing, provide environmental benefits such as shade and serve as wind barriers, hopefully aiding in the reduction of the State Police Post's energy demands," Knight said. "But more importantly, the trees are symbolic of State agencies working together to benefit our community."