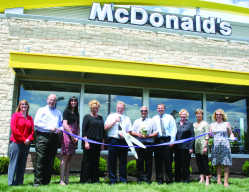 CLOVERDALE -- The new McDonald's in Cloverdale opened on Thursday, just 84 days after being torn down.

Owner Bob Jedele purchased the location, along with the one in Greencastle, in 1995.

He said the rebuild was needed "just to be current and cutting edge for the future."

"I want to thank Cloverdale and Putnam County for being patient while we rebuilt," Jedele said. "This is the new design. The new McDonald's."

Among the changes: A dual drive-through that allows two customers to order at the same time; a more spacious dining area; and dual point service, the first of its kind in the area.

Dual point service changes the way customers wait for their food after ordering.

At other locations customers are given their drink cup, leave to fill it up, and wait for the food in the order to be called out ("Cheesburger! Fries!"), then return to the same register they ordered from.

With the new process, location GM Jim Tate said, the customers are given a receipt with their clearly displayed order number, asked to move away from the register without a drink cup and wait in a more open area to the side.

A screen displays the customers order number when it is finished being assembled, so there is no need for shouting or confusion as customers grab the wrong food.

Reopening means jobs for more than 75 workers in Putnam County. Although many were relocated and have returned, new employees have been hired to help with the rush of the new restaurant.

Jedele said McDonalds' corporate specifications prevent the building from being fully LEED (Leadership in Energy and Environmental Design) certified, the building is much more green than in the past.

Among other things, 40 percent of the material was reused from the previous building, the insulation is made from organic material, and there will be an LED sign outside that uses only a fraction of the energy as before, Jedele said.

Jedele owns six other locations in the area and expects this design to be sufficient for about 30 years. 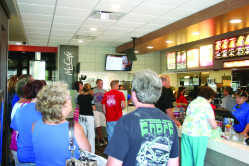 The new lobby of the Cloverdale McDonald's features dual point service, the first of its kind in the area. It helps speed service and limit customers from taking the wrong order.