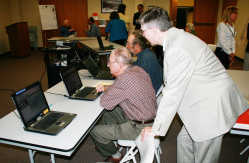 With DePauw University Archivist Wes Wilson looking over their shoulders, Don Weaver (left) and Steve Timm use laptops to explore the new digitization website featuring the Banner Graphic and its newspaper predecessors from 1837-1974.

An ambitious project linking the good, old days of text-only, black-and-white newspapers to the latest and greatest in computer technology sprang to life Wednesday in Greencastle.

Partnering 142 years of local newspapering with a year's worth of new, state-of-the-art digital technology, the resulting "Digitizing Greencastle: Newspapers 1837-1979" project was unveiled to the public Wednesday evening at the Putnam County Public Library.

The PCPL, DePauw University Libraries and the Banner Graphic combined efforts to launch the "Digitizing Greencastle" project. The online digital archive that has been created includes thousands of issues of Greencastle newspapers that are now available to researchers worldwide.

"This has been one of the smoothest collaborations I've ever been a part of," DePauw Director of Libraries Rick Provine praised.

The papers can be searched via the De-Pauw Digital Library: http://digital.library.depauw.edu.

The idea for the project came about, DePauw systems librarian Brooke Cox told those attending Wednesday's reception, after the university launched its digital library (among its shared offerings are 24,000 photographs from the donated collection of the late Ralph Taylor of Taylor Graphics).

"We frequently sat in planning meetings," Cox said, "where we would say, 'Gee, wouldn't it be great to have the Banner online?' And someone else would say, 'Yeah, we should get a grant.'"

"I had a very small part in it," List told the group, "basically just saying yes." 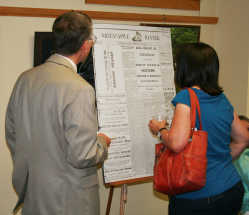 The "Digitizing Greencastle" project was unveiled Wednesday evening at the Putnam County Library where several old newspaper front pages, including a Greencastle Banner from 1882, were on display for the public.

Besides permission to proceed, List also provided a letter of support for the project from the Banner Graphic, and in spring 2011, Digitizing Greencastle was made possible by a grant from the U.S. Institute of Museum and Library Services (IMLS), administered by the Indiana State Library.

Grant funds in hand, the DPU Libraries staff and students Travis Miller, Isiah Miles and Charles Smith, began the arduous task of processing newspaper pages from 120 rolls of microfilm that included more than 100,000 frames that had to be digitized and uploaded into the digital library.

Eight hard drives were necessary to capture the hundreds of thousands of files that make up each issue of the newspapers, Cox said.

The rest of the project, digitizing the remaining papers through 1979, and even extending beyond that year, will depend about future grants or other funding availability.

"We're not finished," she said. "More pieces are being added to the digital library every day. Check back."

The digitized newspapers can also be accessed through the PCPL website as well as the DePauw site, offering "endless possibilities for new research," Cox suggested.

Users can browse by title or date or type in key words or phrases to navigate through the search process.

"I'm thrilled we're able to offer something like this back to the community," Provine said, calling the newspaper project partnership "the town-and-gown manifestation of our history."