After 20 years, Marvin Evens recalled as a hero and a friend 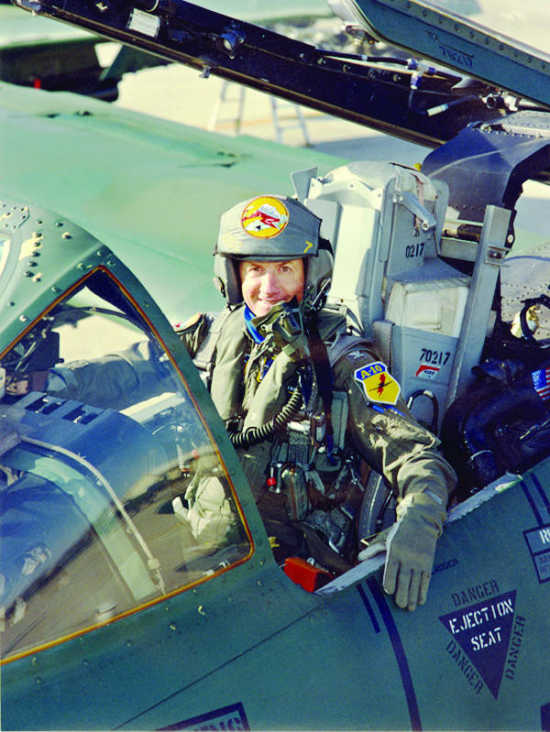 The United States Air Force honored Col. Marvin Evens (above) on Monday, renaming a street at Grissom Air Reserve Base as Doc Evens Avenue, memorializing the pilot and flight surgeon who died in a 1992 crash during a training mission several miles south of the base.

GRISSOM AIR RESERVE BASE -- His friends in the Air Force called him "Doc." Others called him Marv. For the family his name remains Marvin. And as a Colonel in the USAF Reserves, others most certainly called him "sir."

But since his death 20 years ago, no one has been shy about calling Greencastle native Marvin Evens what he certainly was: a hero.

Evens, who at the time of his death was the only dual-rated flight surgeon and pilot in the United States Air Force, passed away when his A-10 Thunderbolt II crashed near Grissom Air Force Base on April 11, 1992.

At the time he was the commander of the 930th Medical Air Squadron, an Air Force Reserve Unit at Grissom.

Eyewitnesses to the crash say Evens could have ejected safely shortly after his jet lost control. Instead, he stayed with the aircraft until he had steered it clear of nearby houses, likely saving several other lives.

By the time he ejected, it was too late to save his own.

On Monday, family, friends and Air Force personnel gathered to honor Evens, as Warrior Avenue on the base was renamed as Doc Evens Avenue.

"Our purpose today is to honor a warrior who gave his life for his country," Lt. Col. Don Windt said in commencing the program.

Among the crowd were Evens' widow Phyllis, sons Patrick and Christopher, brother Irwin and twin sister Marlene Masten, and around 20 other relatives.

Col. William T. Cahoon served with Evens and is now the commander of the refueling wing stationed at Grissom. He spoke at the event as well as assisting Phyllis Evens with unveiling the new street sign and a framed lithograph that will memorialize him in two buildings on base.

"Doc Evens was a remarkable person," Cahoon said. "He was talented. He was capable. He was a man of character.

"It's not often you find someone who is both well-respected and well-liked, but Doc Evens was certainly both of those."

The choice of street was not incidental -- simply a road on a base where Evens once served. The former Warrior Avenue runs past the 434th Aerospace Medicine Squadron and the flight operations building that houses the 72nd and 74th Aerial Refueling Squadrons. 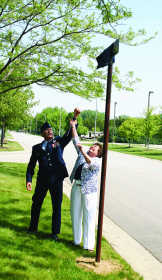 It is a fitting tribute to a pilot and doctor.

Retired Maj. Gen. Robert Nester shared his own thoughts as well as those of former colleagues who could not attend. A letter from retired Maj. Gen. Boyd Ashcraft summed up the empathy the doctor had for his fellow pilots.

"Pilots view most doctors as a threat but not so with Doc Evens," Ashcraft wrote.

Look at Evens' life and it's easy to imagine how he could see the other side of things so well. The hats he wore professionally included farmer, veterinarian, pilot, anesthesiologist, businessman and flight surgeon.

Although he lived much of his adult life in Indianapolis, Putnam County residents may remember Evens as a Madison Township native, a 1954 Greencastle High School graduate, the owner of Evens Implement John Deere dealership for 10 years or as the 1991 Putnam County Soil & Water Conservation District Conservationist of the Year.

He was also a member of the Long Branch Church of Christ and Temple Lodge No. 47 F & AM, Greencastle.

However, the most poignant portion of the ceremony came when Evens' son Patrick, a pilot himself, spoke, remembering his father as a man who "always had a love for the Air Force and everything it embodied."

Patrick read the poem "A Man Called Marv," written by Col. L.A. Bienvenu shortly after Evens' death. Although there were some mournful moments, most in attendance smiled much of the day, lending credence to one of the final passages of Beinvenu's poem.

When you think about Doc Evens,
It's hard to stay real sad,
'Cause he left us with great memories
That naturally make you glad

Retired Chief Master Sgt. Mary Stamper also helped sum up the day in speaking about the man who was both well-respected and well-liked.

"It was an honor to me to have Col. Evens as my commander," Stamper said, "and a privilege to have Doc as my friend."