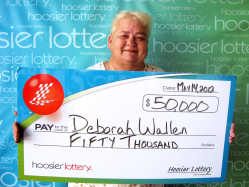 Greencastle resident Deborah Wallen gets a giant check and a big payday from the Hoosier Lottery after turning a $3 Lucky Lines scratch-off ticket into $50,000 at the Casey's store on the city's south side.

A Greencastle woman says she is "crazy happy" about winning $50,000 on a $3 Hoosier Lottery scratch-off ticket.

Deborah Wallen's husband told her to "get some winners" as she walked into Casey's at 1215 Bloomington St. in Greencastle last Saturday.

A few minutes later Wallen walked out of the store with a Lucky Lines scratch-off worth $50,000.

Wallen claimed her prize at Hoosier Lottery headquarters this week. The Putnam County woman plans to use her winnings to do something she has never done before -- see the ocean. She and her husband plan to take a vacation to Myrtle Beach, S.C..

"You would not believe how happy we are," Wallen said. "We're crazy happy."

The mission of the Hoosier Lottery is to return the maximum net income to the state in a socially responsible manner.

In fiscal year 2011, the Hoosier Lottery generated $188 million in net income which was used to significantly reduce the motor vehicle excise tax for all Hoosier drivers and also supported the pension funds for retired Indiana teachers, police and firefighters. Player prizes for the fiscal year totaled $495 million and $56 million was earned by Indiana retailers on the sale of Hoosier Lottery products.

Since its inception in 1989, the Hoosier Lottery has produced more than $4 billion in net income for the citizens of Indiana, nearly $1 billion in commissions and bonuses for participating Indiana retailers, and has paid out more than $8.5 billion in player prizes.