Barrett back in as North Putnam coach 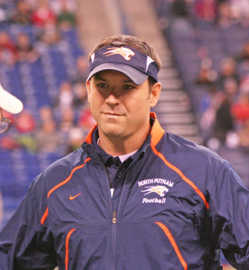 ROACHDALE -- The North Putnam football team will welcome back a familiar face this fall when Greg Barrett returns as head coach of the Cougars.

The school board approved his hiring at a meeting on Thursday night and Barrett is expected to start immediately.

Barrett coached the Cougars from 2008-2010, leading the team to a 33-5 record. North Putnam reached the 2010 state championship game in before losing to Fort Wayne Bishop Luers.

After resigning on February 18 of last year, Barrett spoke to the Banner Graphic about his reluctance to leave the school.

"Things have been great at North Putnam. I haven't been looking for a job, I haven't applied for a job -- this job just came to me and I had to get on board and go," Barrett said. "I was blessed to coach those guys and take them to another level. Those are memories you'll never forget."

Barrett replaces Brian Crabtree, the same man who succeeded him.

Crabtree resigned in March after leading the team to an 11-1 record.