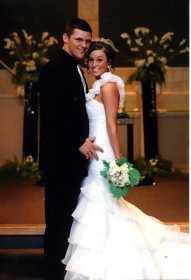 Chelsea is the daughter of Vurlin and Sandi Clark of Greencastle. She graduated from South Putnam High School in 2008 and Ball State University in December 2011. She has a bachelor's degree in fashion merchandising and marketing.

Chelsea is employed at Von Maur as the jewelry department manager.

Caleb is the son of Richard and Lisa Neier of Coatesville. He graduated from Danville High School in 2008 and Purdue University in December 2011. He has a bachelor's degree in agribusiness management.

Caleb is employed at Elanco as a sales representative.

Whitney Warren, a friend of the bride, served as maid of honor. Bridesmaids were Andrea Hoffman, sister of the bride, and Emily Zimmerman and Mollie Cash, friends of the bride.

Richard Neier, father of the groom, served as best man. Groomsmen were J.T. Vieira, Kevin Hanlon and Ben Guthrie, friends of the groom.

Feather girls were nieces of the bride Brinlee, Boston and Kennedy Clark and Avery Hoffman and nieces of the groom Hattie Bannon and Brinley Tennery.